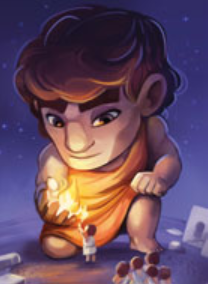 Building before and after moving. It seems attractive. However, for beginners, it may not be useful as it seems when playing with this Titan. This god power has a limit of not moving up, so you can’t directly win on level-2 with this power. Bad news for that. However, if Prometheus is allowed to move up when he uses his power, he will definitely be banned from this game. Why so? He is already super strong now! As the writer of this full guide, one of the gods that I don’t want to be against in Santorini is Prometheus, he is a simply decent multifaceted. He is invulnerable to most of the common winning strategies, like Corner-L, and he has so many winning possibilities as long as he is on a level-2’s, because he can just do what Demeter can do. Moreover, he can be a brutal builder like Hephasetus, turning a level-1 to a tower in no time. What’s more. He can dome your level-2’s like Hestia by building twice on it, while Hestia cannot do this on perimeter space. Playing against him is an utter trouble.

During your turn, if your worker does not move up, it may build both before and after moving.

This power starts before the move stage. Your worker may choose to build an additional block first, if you do, you forfeit to move up.

Once I have thought of a guaranteed level-2 start strategy by Prometheus, while I find no solution to that. Assume first mover Prometheus, build two level-1’s at the corner like Demeter. This is a guaranteed level-1. Next, move up to a level-1 and build a level-2. If no one blocks you, move up. If someone applies level-3 blocking on you, build behind yourself, and move to the new block, then build on the old block. What?

Here, you can see Prometheus being unstoppable to move up to a level-2. You just need to keep doing what is mentioned above and finally corner up your safe level-2, or two-way level-2’s. I can’t really find a solution for this. Thus, the key to destroying this plan should be the god power. For god that without an aggressive power, it can never stop Prometheus from doing so (Chronus: Somebody’s calling me?). Thus, Prometheus could win in the early game. After moving up to a level-2, simply use your power to create more level-2’s so as to corner up your winning position.

Here, we will move on to the later stage of the game. However, the following guide of Prometheus is based on the case that the gods against Prometheus can do something on him in the early game. Some good examples are Pegasus or Atlas. If you are using, um… yea… Chronus, I don’t think you can reach the mid-game.

Assume you are in an advantageous position, you should have won since Prometheus is like Hephaestus. Simply build up the area and your opponent can never go up, so you can easily corner up the winning position later by building a two-way tower like Demeter. This part is uninteresting.

In other situations where you need to be aggressive, while defending your opponent’s move. You may try to use domers strategy, by doming the level-2’s of the opponent by your god power, and expand your area of level-2’s like Hephaestus. Moreover, for your defense move, if your opponent creates some dangerous level-2’s like Corner-L, simply place a worker at the corner. Prometheus can build without moving using his power, so he is invulnerable to corner-L! That’s why in the intro I said Prometheus is so bothering. You will feel very hard to corner up a winning position against him.

As Prometheus being the first mover, his winning move might be unclear to a beginner, but some good players should spot his winning move here. Build at D3, then move to D3 and build at E4. Thus, one playing against Prometheus requires to be super careful. As long as he is on a level-2, he can create some winning tower in no-time, even if he is standing on an alone tower. This is what Demeter and Hephaestus can’t do! For Prometheus, try to move to the area of level-1’s so that you could have more aggressive possibilities. By keeping this aggressive momentum, you may finally corner up a winning position by your opponent doming your level-3’s.

The late game investigation of Prometheus is actually quite similar to Demeter and Hephaestus. I would not talk much here since it is quite repetitive. However, I do think that when countering Prometheus in the late game, forcing his worker to move down is always a good choice. Like Hermes, when Prometheus moves up, he loses his chance to use his power. Unlike Demeter and Hephaestus, where a must-win situation can be easily created by moving from a level-1 to a level-2. Thus conversely, Prometheus should have a planful build such that he doesn’t need to fall for defending, which is actually simple for him. For example sometimes, you may use your first build to smoothen the levels, and use the second build to defend. Using this strategy, you will be less likely to fall too much in the late game, and hopefully win the game.

This is a classic matchup, where both gods can build twice, and Prometheus seems to have larger constraints. However, Prometheus in fact does better in defending, since he can simply stand at some corner and defend by his power of building without moving. In most of this matchup, I realized that having Demeter to move up to a level-2 in the early game is inevitable. As a Prometheus, simply try to stick with Demeter on some level-1. In this case, packed along with your crazy defensive power, you can defend all Demeter’s aggressive towers by your power. Keep in mind for two points. First, you can defend by the first build without moving, in this case, make sure you have some smoothened level around you so your move won’t force you to move down. Secondly, you can defend two-way towers better than Demeter, since your two builds are more distant. A fair and super fun match.

The early game strategy from Prometheus can be easily applied on Chronus to reach level-2. However, Chronus can exploit this strategy and create 5 complete towers easily. Beware that if Chronus try to dome the level-3 and let Prometheus move up, Prometheus may easily extend the area of level-2 and create two-way towers. Thus, before Chronus try to dome level-3, try to have one worker stick with Prometheus on some level-1, so that Prometheus cannot easily corner up the winning position by extending level-2s. From this, we should realize that it may not be the best for Prometheus to use that mentioned strategy to reach a level-2, when facing Chronus.

Prometheus biggest drawback is to move up. He loses his power when he moves up. As we know, Scylla can easily pull you down a level, and Prometheus needs to walk up Santorini slowly again.

As I said in the article, Prometheus is definitely a powerful god. However, since its build occurs before moving, playing with or against Prometheus requires a specific moveset and strategy. Common winning strategy like Corner-L does not threaten him, and two-way towers from Demeter or even Graeae (distant two-way towers) may not yield a guaranteed win. Thus, the counterintuition might make him not a good god for beginners. However, upon deep investigation and learning of him, you can quickly show his both aggressive and defensive sides powerfully. And definitely, his tier ranking is impressive. :)

Unlike Demeter, Prometheus is not as easy to use for a beginner. However if you are more experienced in Santorini, as long as your Prometheus is on a level-2, it is as dangerous as Pan. Moreover, as an opponent you need a planful build to prevent Prometheus from doming your winning position. Hence, choosing Prometheus is always a good choice after some investigation on him.