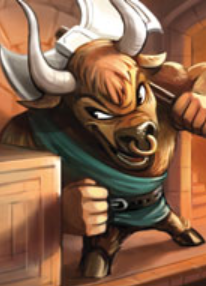 With his powers similar to Apollo, Minotaur also seems useless at first. However, the truth is completely different. Not only can he give himself an advantageous position, but also he can push his opponents to more and more disadvantages. But how should he use his pushes?

In your move stage, your worker may move to an opponent worker’s space, if their worker can be forced one space straight backward to an unoccupied space at any level.

This power is activated during your move stage in the turn. The word “move” is used so this only happens when you actually can move to that space. Thus, minotaur cannot push a level-2 opponent from the ground. Moreover, if the space behind the opponent is occupied (i.e. with a worker), you cannot push him. Remember that you can push him to ANY level. That means you can push a grounded worker to a level-3, but this won’t yield a loss, since his moving up does not happen in his move stage. Moreover, your opponent worker needs to be forced one “space” backward, so if the space behind them is the wall, you can’t push them (not even Urania).

Minotaur’s power is so significant in the early game, like Apollo, by using level-1 threatening strategy. Thus, he is required to stay close to the opponent. Do not try to apply no interaction strategy. Your power will be useless because you cannot push them around. Try to stay close.

Minotaur is pretty good at pushing people so similar to Apollo, you can wait until they move up to a level-1 and then push them off. What you don’t want to do is to make it so if they move up, you can’t push them because they would run into the wall. That means you may not want your opponent to go up in the edge space. Clearly, level-2 blocking should apply here. Try to use level-2 blocking on your opponent’s level-1 in the edge space to force them to go up in some inner space. This can utilize your pushing power. Remember that for every push, you would like to put them in a bad position while putting you in a good one at the same time. If they try to run away and you are on a level-1, you can use your second worker to follow them. Another good strategy is that, if they put a level 1 behind them so your push will force them to go up, you should still push them because they will anyway have to move down to build another level-1, or use another worker to build level-1 around you. Smart readers may find that this is so similar to level-1 forfeiting strategy. After you can move up while sticking with your opponent, it might not be a 50:50 position, since you can do more than your opponent, by pushing them off the edge!

Moreover, it is a good early game strategy to let the opponent worker move up first and then push them off. Then you can move up while pushing them down and you can turn the tide just like that! Then you are off to a good start!

As an opponent of Minotaur, you probably would not want to move up on to a level-1 unless Minotaur couldn’t push you off. Also you don’t want to put a level-1 behind you because you may have to come down anyways. However, sometimes this is your only strategy to counter Minotaur, given that you are not some good check on Minotaur. Just try to build with your both workers such that Minotaur’s push would not bring you to so disadvantageous or help him to corner up a safe level-2. Moreover, remember that Minotaur cannot do anything on you as long as you block his way to go to your place. Clearly, some of the player-blocking gods can easily counter Minotaur skill even in the early game. We would mention more in the specific matchup.

Tip: If there is a level 2 and no building around it, you can try to push the opponent worker up there with no really big cost.

A good mid-game situation is that you are standing on a level-1 with a few other level ones around you and the opponent is on the ground. Now, you are in a good position. If the opponent tries to move up again, and he builds behind him so your worker that is on level 1 can’t push him off, you can always set your second worker up to push him off. You can keep playing the push game or move on.

To move to the next step, all you have to do is build a level-2. You want to do this when the opponent worker’s are either on ground level or can’t move up. You might think that if they move up you can push them back off, but they can just build a level-2 behind them. You want to make Minotaur count.

In some situations, like if you are standing on a level-1 on C3 and there are 8 level-1’s around you. The opponent moves up and puts a level-1 behind them. Then, you can push them because even though they don’t go down to the ground level, they will have to move off anyways to get back to the other level ones. It means you limit their choice to move or else they need to be pushed off the level-1 by you!

You should be able to get to a level 2 pretty easily and if the opponent ends up getting to a level 2 too, all you have to do is push them off! Then they are off and once again you are in a good position but this time, you are 1 level higher than before.

Tip: As Minotaur you can move down from a level 2 on purpose to set yourself up to push the opponent off!

For me, Minotaur is pretty strong in the late game, as long as you are at least 50:50 with your opponent. You know, like Apollo, if Minotaur is in a disadvantageous position, this monster can never come back.

Assume an at least 50:50 situation, with most of the board being level-2’s and some unbuilt ground. Minotaur push can easily secure a win. For example:

Here, Minotaur at E3 can move to E2 and build a tower at E3. This forces the opponent to move to D3 to dome you. However, this will bring your opponent neighboring you and you can push them off the level-2 in the next turn! Then you will be in a super advantageous position, not so far away from winning this game.

Moreover, remember that pushing an opponent to a level-3 will not let them win. Sometimes, this push may win the game since it in fact puts your opponent in a disadvantageous position. As your opponent is already on level-3, when he moves down, he is REQUIRED to dome the level-3 he was standing on. This limitation of his movement may easily help you to secure a two-way tower instead. For example:

As the first mover, Minotaur moves to E2 and builds at E3. This forces the opponent to move down and dome your winning position. However, this move-down will open up another tower for you to win. Thus, the opponent clearly loses this game because he is standing on a level-3. We can see the power of pushing opponents to a level-3 here.

Minotaur level-1 threatening strategy cannot apply on Athena, since when Athena moves up to a level-1 next to Minotaur, Minotaur is disallowed to move up together. Moreover, an Athena with no-interaction strategy may impose a big threat on Minotaur.

Urania swift movement along the edge may easily escape from the catch of the bull-headed monster. This could be an unfair matchup since Minotaur may not even be able to use his power once and lose already.

Minotaur pushing the opponent means he is next to the opponent the next turn, and Scylla can use his power surely. The same apply on Scylla, where using Scylla power means neighboring Minotaur, but this is not 100% for Minotaur to apply power on Scylla since Scylla may have simply moved to an edge! Thus, I do think Scylla is a big counter for Minotaur.

They can simply apply level-2 blocking in the early game and swiftly move up to the area of level-2’s within one turn. With the bad building power of Minotaur, this monster can never catch up with these jumpers.

Clio’s dome is more interesting than other domers. She can move up to her token but not Minotaur. Thus, Clio may easily escape from Minotaur’s catch and secure a winning position. Again, the bad building power of Minotaur may not be able to force Clio to follow its pace, but Minotaur needs to follow Clio’s path toughly.

Like Apollo, Minotaur is super strong in all stages of the game, AS LONG AS your opponent is not a big check for you. However, there are quite a lot of big checks for Minotaur, so be smart when you choose Minotaur in tournament mode. Do not put him under trouble such that vs-ing Urania.

Minotaur could have a very hard time against jumper gods. However, as long as the opponent is not using some good counter on Minotaur, Minotaur is super easy to use and most importantly, super strong in all early game, mid-game and late game.