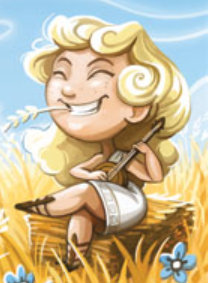 Demeter is a quick builder in many people’s eyes. With her double builds, she can create a lot of opportunities to win the game. Moreover, she can easily create two-way level-3 towers and guarantee to win in the late game. Here we would investigate how to use her build wisely.

In your build stage, your worker may build one additional time, but not on the same space.

It happens in your build stage. Moreover, it is a “may” statement. You can build only one time as usual.

In early game, just always build two level-1’s as long as they are free from your opponents’ touch. What you shouldn’t do is to go to the middle of the board and start building like crazy. You want to go to the corner and if possible, the corner farthest away from the opponent workers. This way you can move up to level-1 quickly at the beginning of the game. If the opponent goes in the opposite direction from you and tries to build to their victory, they will lose because you can build much faster. Thus, Demeter is a very good “no-interaction” strategy user. Basically, try to get on to a level-1 without an opponent worker trying to get on a level-1. You can almost guarantee this by moving to the corner and putting two level-1 blocks out of the opponent's reach. Then, if he tries to block you with a level-2, there is still a level-1 left. Also, if he tries to put a level 1 next to the other level 1’s, you could move up on one of them and build a second level on the other two, which in turns block your opponent from moving into your area of buildings.

Therefore, as an opponent of demeter, you would not be willing to do those mentioned above. However, you do need to stick with Demeter, or else she will go to the top instantly. Hey, so building something next to Demeter is bad, while sticking with her is the only chance to win against her. Is it very confusing? Don’t forget that you have your own god power. Your god power is the only key to playing against Demeter. Without god power, I bet one can never stand a chance against the goddess of harvest. In the matchup part, I would mention several gods that can do well against Demeter in the early game.

In the mid game you will want to get to level-2 without the opponent getting there. Otherwise the opponent can stay with you and you no longer have the builder advantage. Demeter is the best stay away from your opponent, especially when you are taking the lead to the top. If you do stay away from your opponent, you can build safe level 2’s easily and get on the top. You can quickly create the “corner-L” and secure a win. Also. since you have 2 builds, it will be pretty easy to prevent anyone else from getting up there. Use your level-2 as a block if you are in an advantageous position. If you are sticking with your opponent on the same level, use your build wisely instead. Your build may become the prey of your opponent.

In the late game, you should notice that on a big area of level-2’s, there should be much chance to create two-way towers for Demeter due to her builder power. Thus, your opponent will just always stand next to you to prevent such things from happening. In this case, try to be aggressive with good planning. Keep building towers and threaten your opponent to move as you expect, you may finally find a perfect place for you to have two-way towers. For example:

With Demeter (C2) as the first-mover here, you definitely want to move to (D3) to build two-way towers to win. However, the position of your opponent does not allow you to do so. In this case, remember, be aggressive. In fact, moving up and building at the corner (E1), Demeter can threaten the opponent to move away the two level-2’s, and then move to D3 to build two-way towers on D4 and E4, securing a win.

Thus, the late game of Demeter is actually super powerful. As an opponent, try not to allow such a big area of level-2’s existing on the board. During the mid-game, you should be ready to tower up some level-2, forcing Demeter to dome them may create some asymmetry in the board, which is unfavorable to Demeter late game.

These two gods could be a good counter to Demeter early game. In the early game, Demeter usually builds in the corner but Triton would be super glad to see so. For Artemis, it is not only because Artemis reaching level-1 is unstoppable. The weak builder power from Artemis might be compensated by her opponent, Demeter. Thus, when facing Artemis, try not to build like crazy or else the thriving Santorini created by Demeter will be topped by Artemis instead. Thus, for Demeter, this matchup requires more thinking but still a fair match.

Another good mover with move-up constraint

What I mean is actually Hermes. Hermes will have a headache facing Demeter. Hermes's lightning speed comes from not moving-up. Thus, simply 5 horizontal level-1’s on the board could block Hermes from going from the South to the North. Yea the example is so exaggerated that it should not happen in a matchup with Demeter. However, what I mean is Demeter can simply build level-1’s while blocking Hermes from reaching her area of focus. I would usually avoid this matchup since Hermes would be in a super disadvantageous position.

The mentioned builders are packed with something that Demeter does not have, which is the power to build twice at the same tile, and I call them “brutal builders”. This could be very important especially under the “no-interaction” strategy. You should notice that, on a new board, Hephaestus only requires 4 turns to reach the top, while Demeter requires 5 (which is the one smaller than no power). Thus, these builders can really ignore Demeter and just build for themselves. In this case, Demeter needs to stick with them instead and create a big platform of level-1’s to ready for their instant level-3. Thus, we see that the seemingly perfect early game strategy by Demeter would not be applicable on these three gods. Demeter may be quite frustrated in the early game.

Prometheus could build twice on the same tile too, but he requires a platform of same levels to do so. With such constraint, I didn’t put Prometheus in this counter list. I think Prometheus vs Demeter would be a 50:50 match in any stage of the game.

As I said, without any god power, Demeter is really hard to stop. Chronus does not really have an active god power, so he would have a hard time against Demeter. Avoid this matchup to save poor Chronus.

Hippolyta ruins Demeter’s early game strategy since Demeter cannot easily build 2 level-1’s for her own favour. In this matchup, Demeter will seldom find her god power useful against Hippolyta.

Err… Urania again as a big counter for a god. Demeter early-game strategy is usually corner building, while Urania does not have a corner. She can simply build on the other side while interacting with Demeter. In this case, Demeter would be super disadvantaged since Urania can use her building, but she cannot use the building on the other side of the board.

Demeter is easy to use since the early game strategy can be applied in most matchup, and her power is too powerful that you MUST ACQUIRE a god power to beat her.

As long as you are not against brutal builders, or Urania, I really recommend you to choose Demeter among the two gods available.