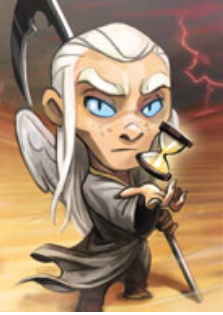 After playing several games, you will notice that if someone threatens to win by moving into a level 3, the logical reply (most of the time) is to dome that space, completing a tower. If the match is balanced, this is bound to happen several times, so the game usually ends with several complete towers. Therefore, many apprentices think if a power gives an extra winning condition if there are at least 5 complete towers in the board, this should be great, isn’t it? Nope--don’t forget that I have said: “if the match is balanced". If Chronus didn’t have an extra winning condition, he would be a Mortal. Against almost all the powers, if you forget the extra winning condition, the match is extremely unbalanced and the game will almost always end with less than 5 complete towers. This means that most of the time Chronus won’t make use of his power. In conclusion, Chronus is very deceptive since at first it might seem easy to get 5 complete towers, but you can’t forget that you have no other power. Chronus is in fact the weakest power of the game and even a very experienced player will have a hard time playing with him.

You also win when there are at least five complete towers on the board.

So it might seem a good strategy just to build a level 2 in the spaces your opponent built a level 1 (intending to build a tower in that square). But the problem with this strategy (don’t forget your opponent has a power), is that your opponent will win these level 2s for his own advantage and even if you are able to dome that square (and maybe one more), your position will most likely be completely lost.

If you are playing against Chronus, don’t go for the corners. For example, if you build a level 1 in the corner and Chronus is able to build a level 2 in that square, there’s not much advantage you can get from that. Yet if this level 2 wasn’t in the corner, the story would be different.

The games with Chronus will usually finish within a few moves (maybe Ares could be an exception?) because either Chronus wins (usually with his condition) or the opponent will win first (this will happen most times). So not much changes from early to mid game.

If you are playing against Chronus, don’t be afraid to create your own threats, even if that will cost you a complete tower. If that implies that Chronus gets a bad position (for example by staying in the ground), you will most likely win before there are 5 complete towers.

Here I’m imagining a dream position for Chronus (which is nearly impossible), where only he is on top of a level 2, with some adjacent level 2s only he controls. The natural thing to do is to threaten to win by moving to a level 3, even if the opponent blocks all your tries. The goal is that your opponent wastes his own moves blocking your threats and making you closer to victory. If you are able to do this and complete 4 towers, you will most likely win. Your remaining worker on top of the level 2 can just move down, build a level 3 on the square he was in, and in the next move build the complete tower. Then it's game over.

It won’t be easy for Chronus, but he is careful enough and can avoid double attacks, he might be able to win.

This is a very interesting matchup. Chronus will try to complete towers, but this can all be for nothing if he doesn’t have his workers nearby. It is not clear who holds the advantage in this matchup… I would say Circe, since it might be easy to “force” Chronus to be separated, but this is definitely a balanced game.

Hades is also very weak, and that is why Chronus is able to beat him. It won’t be easy, and in this game you probably have to go for another strategy with Chronus, but you definitely can win. The best strategy here might be to play it cool and try to stay in central squares. If Hades threatens to move up next to you (and you don’t want to), you have two choices:

If it wasn’t for the “invisibility”, Hecate would be a mere Mortal. This is why Chronus might be able to win this one. But anyway, it won’t be easy for Chronus.

You can think of Hera as having no power (of course she has), but she is a “passive” god in the sense that the opponent is almost free to do whatever he wants to, he just can’t win by moving to the perimeter. This could still affect Chronus as if he threatens to win (by moving up) in the perimeter, Hera can just choose not to dome that square. With that being said, Chronus should try to play in the center (and stay off the perimeter unless it is to defend against Hera). If Chronus is able to create threats in the center, this is a very good indicator of a favorable position and Chronus is close to victory. Anyway, and I say it sadly, Hera should be better in this matchup.

This is the most surprising matchup involving Chronus. Nemesis is usually pretty strong, but if you spend the game just building towers, Nemesis’s power is useless and Chronus doesn’t care if he switches positions with Nemesis. This is a balanced game and you should give it a try!

Probably the only matchup in which Chronus holds an advantage. Even if Nyx’s night power is strong, you might be able to work around that by immediately completing a tower and getting the power back. Thus, the strategy in this matchup as Chronus is to make sure you are ready to complete a tower whenever your opponent gets his power, without giving too much initiative.

The best strategy to try here would be to go to the squares in which Tartarus has already been (follow Tartarus). If Tartarus isn’t able to create a strong attack, Chronus can beat him.

If Chronus is facing a power which was not mentioned until now, then his hope is pretty much lost. The gods in this list may raise the question of if they are quick enough to defeat Chronus. The answer is: Yes, 99% of the time. As it has already been said, only a “passive” god can be defeated by Chronus.

Apollo can go for the attack to win. Ares, although a defensive god, can prevent Chronus from building his towers. Chaos might change his power twice or thrice, but by then the game is basically won. Powers such as Dionysus or Gaea, which like domes, might sound appealing to Chronus but this is again misleading as after one or two towers, Chronus should be significantly worse (but he might have a little chance). Eros is playing against a Mortal so his winning condition will be decisive. Harpies and Hippolyta win very easily against Chronus. Chronus puts up a bit of resistance against Maenads, but she is just too strong for him. It might seem that Chronus can defeat Persephone (and in this one he might, although I doubt it), but she can drive him away. It also seems that Chronus can win against Zeus, but his initiative is sufficient to defeat Chronus.

Chronus wins the prize of the weakest god of the game. There are many matches where it is just impossible to win against a good opponent. The matchups specified above, give Chronus an opportunity for a balanced game, but Chronus is almost never the god with the upper hand. Against a weak player, you might try the match Mortal vs Chronus and you might be surprised with the result (you can win!) and I guess this tells it all.

At first it might seem simple to get 5 towers on the board, but if you give it a try, you will see that it is not quite the case. Chronus is weak. A suggestion in order to make the games involving him more interesting is to bet the number of complete towers, i.e., change the power to say, at least 4 complete towers. If both players agree, then this could bring some enthusiasm to a game involving Chronus.

P.S. It is indeed possible to win as Mortal in Mortal vs Chronus. Check out: https://www.youtube.com/watch?v=g2A72VfMsa8