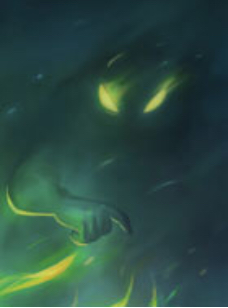 When I first look at this, I think it is just a mix of gods and only Hamlets will play it. However, I was taught a lesson to beware of this monster in my first match with him since a sudden Pan can turn the tables upside down. After delving deeper, I start to realise how this v.s. Atlas can be funny with Atlas controlling Chaos’ power change! But most importantly, how to use this multi-faced power?

Shuttle all the unused simple god powers into a face-down deck and draw the top card. At any time, you have the power of the face up card. You must discard your card and draw a new one (if needed, shuttle) after any turn which at least one dome is built.

Firstly, since Chaos only uses unused powers, you don’t need to worry about mirror matches. Secondly, since Chaos changes when domes are built, domers can change Chaos’ power by building a dome without creating complete towers. Thirdly, the powers are random, so it is excluded in perfect information mode.

When I play with Chaos, I just pray for one thing: Not to start with Pan (if possible not even Hermes). These gods are passive in comparison with the other possibilities and can allow your opponent to get a good position in the early stage of the game, which can prove to be sufficient to win. Furthermore, starting with Pan means that if you ever get to play Pan again, this will only happen after lots of domes have been built, so you most likely won’t play with Pan again.

You notice that I said it is bad to start as Pan. One clear reason is that if you are in the mid game, you can move up to a level 2 quite easily if you have basically any of Chaos’ powers (consider Artemis for example). Then, if Pan comes, you win just like that! This is OP and part of the reason why some people don’t like Chaos. I honestly think that it is probably better to discard Pan when playing with Chaos, yet Chaos would still be very strong. But if Chaos is playing with any of the possible simple gods, he is probably doing just fine.

If you are in a comfortable position with Chaos, being on top of level 2s, you might want to threaten several level 3 wins until Pan comes out. This is really common since there is just nothing the opponent can do except to pray that Pan doesn’t come out. All the strategies mentioned until here involve Pan, but don’t forget, even when you are not Pan, Chaos is still pretty good.

Someone might try this matchup. However, as most times, Chronus is just not strong enough and it will be easy for Chaos to win.

Since Chaos swaps power each time a dome is built (not a complete tower), this combination adds even more randomness to the game and Chaos might be changing power each round. With these gods, it is easier to counter the possibility of Pan being effective.

Here is a god that can face Morpheus--Morpheus is feared by many but not by Chaos. Chaos is able to put on a good game and before Morpheus notices it, Chaos might win.

If it wasn’t for the randomness, this god would be an A, as the combination of several gods is just too powerful (and not just any gods, powerful ones). The problem is that most of the time you don’t know what to expect and the next power might be good or bad (but mostly good), according to your position.