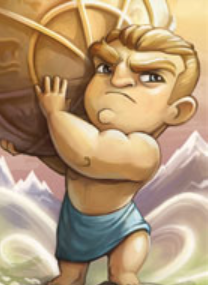 Atlas could be a joke for newbies as some newbies will just keep building domes and finally trap themselves, or someone will just keep building domes and forget to move up for winning. However, it is actually a very formidable god to play against. In early game, as long as one of his workers stays at the center, he can go wherever to block your moving by a dome. When you think you are securing a win in a corner, he just builds a dome from the ground level and blocks your innocent worker. You can simply win by blocking both of the opponent’s workers using Atlas. Moreover, there is a special winning strategy for Atlas, it is to dome one of your workers on an alone island. That means no one can go and block your win. In the following review, we would focus on the normal strategy of Atlas.

In your build stage, (instead of your normal build), your worker may build a dome at any level.

I don't think this explanation is not clear enough. To me, Selene’s and Morpheus power mentioned the sentence “instead of your normal build”, but this isn’t mentioned in Atlas’s power. However, both of Atlas and Selene’s powers are alternative builds. That means if you activate the power, you cannot normally build, but you build with the description instead. Moreover, “at any level” means you can simply place a dome on ground, level-1, level-2 or level-3.

Atlas is neither a good builder nor a good mover. If you want to simply keep building and moving up without any interaction with your opponent, Atlas could be a bad choice. Thus in the early game, you should always have at least one worker around your opponent (and at best only one). If the opponent is already on level-1, you can ignore the level-1 they recently built. It would not be a big threat and you should grab this chance to move up another worker. Yet, try to dome the level-2 your opponent builds. The reason behind is, doming a level-2 is simply wasting your opponent two building turns, but doming a level-1 is actually using your own single turn to waste one turn of your opponent.

Moreover, keep an eye on the cornered worker, Atlas can easily trap a cornered worker by doming ONLY 3 SPACES. With this corner-blocking skill, your smart opponent would try to keep away from corners. Thus, Atlas is actually the best user of corner-winning strategy. Your opponent would be less willing to reach a corner to block your way.

It depends on the situation of the game, if you are on the disadvantageous position, where both of your workers are still on ground level, try to block the way of your opponent’s level-2 worker. You may be able to force him to move down by blocking all other possible routes, and so the game will be back to a situation like the early game. If you are in a 50-50 situation, try to keep one of your workers around the opponent’s mover, not letting them build more level-2 and hence they may just need to move down to create a new platform for winning. During these blocking, remember to keep the momentum of your other worker to move up! Do not let your workers both on the ground in the late game! If you are in an advantageous position, Atlas’s skill could easily secure your win. You can dome all opponent’s ways to block your win and corner-up your winning position.

If both of your workers are still on ground level… GG, since your opponent could easily use level-2 to corner up their winning position. If at least one of your workers stays with the opponent, Atlas skill could become handy here. In late game, sometimes our moves are confined by the “MUST move and build” rule. Some moves in the late game would force us to build a level-3 for the opponent and guarantee a loss. Atlas will not encounter this problem because he can simply build a dome instead of a level-3. In the late game, try to use domes to force your opponent to make some unwanted moves.

Now this is a different strategy, but this is what I like to do and for me, I always win doing this. If you do this correctly, no one will be able to beat you. What I do is pretty much only build domes. For me, since Atlas is not a good builder, there is no point in building normal blocks because that wastes his power. I like to win by trapping both opponents so they can’t move anywhere. The way I do this is start by doming one of the corners. Then, from there, I build one or two more domes in a line on the perimeter spaces from that corner. The reason I like to start at the corners is because I don’t want to put all of these domes down and then have a bunch of little spots where opponents can sneak into and I can’t block them. So, once I get 2 or 3 in a row from the corner on a perimeter space, I start doing that from another corner. As said before, don’t dome a level 1 unless it is a necessity.

Now, only dome level 2’s. This will give you time at the beginning of the game to build on perimeter spaces. It is very important to keep as many domes as possible at first on the perimeter spaces. If a level 2 is in the middle, if possible, don’t even dome it. Wait until they either build a level 3 or you have to because they will block you otherwise. Once an opponent worker moves into a perimeter space, try not to let them out. You can do this by moving one of your workers adjacent to the opponent worker in the perimeter spaces, then if there is an open middle space that that worker can access, dome it so the worker has to stay in perimeter spaces. Keep following that worker until you trap them by not letting them into the middle and eventually closing off all ends. Then, when you move away, dome where you just left so they can’t escape.

I like to try and trap 1 opponent early game so I don’t have to worry about 2 later on. Then, just focus on doming the outside of the space that is left, until there are 4 spaces left. When it is your turn, dome one of the spaces. No one can move anymore, but since it is their turn, you win.

A good player should never corner yourself against Atlas, hence your winning position is usually in the inner space instead. Demeter and Hestia are good builders even in the inner space. Recall the level-2 blocking strategy from Atlas? Atlas cannot perform this strategy well on Demeter because Demeter can simply set up a two-way for herself to move up to level-2.

For Atlas, facing this two-way situation, think deeper and dome the level-2 that favours your opponent more. For example, Demeter moves up to a level-1 E2 and builds two level-2 on E1 and E3. Blocking E3 would be a good choice since Demeter would then move up to a corner space if she really wants to move up, which then makes her vulnerable to corner-trapping. Do not try to ignore the opponent’s mover. You are never faster than a good builder.

Atlas cannot easily block her but may block himself instead. Urania is not vulnerable to corner-trapping and pausing the momentum of Urania would be a very hard work for Atlas. For Atlas, use your domes wisely. Be more careful for the position of your worker. Always keeping a worker at the center may help you to block all possible routes for Urania to move up. A ridiculous strategy could come handy: block every perimeter space and Urania’s power would become useless.

Chronus would be overwhelmed by Atlas's ability. When using Chronus against Atlas, just play as if you do not have any power, since Atlas can simply build domes everywhere, shutting down the possibilities to build 5 complete towers on the board. I don’t really recommend this matchup in tournament setup. Avoid it.

Matchup against Zeus could be quite different. It is hard to block Zeus from going to level-2, so the level-2 blocking strategy by Atlas is no longer useful.

For Atlas, as you can’t really block Zeus from moving up to level-2, you can just let Zeus stay on level-2. However, it is still useful to dome a level-2 or a level-3 as it is using a single turn to destroy what your opponent has done in several turns.

Atlas’ domes should never be a joke, but a nightmare to your opponent. Keep your worker at the best position so that you can block every of your opponent’s best moves. Remember that his ability is useful in all stages of the game, so you need to be very careful on every dome to be created.

Atlas is useful on most of the matchup and there is no perfect counter on Atlas. Choosing Atlas from the two gods available is never a bad choice for you!