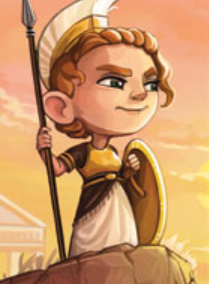 Other than Artemis, Athena is one of the three gods I have met in my first game. As a beginner, we were not as eager as now to move up, so I did not realize the strength of Athena. However, after realizing the high win rate of Athena among all the gods I have played, I started to look into the power of the goddess of wisdom. Simply put, the most common method of winning is moving up to the third floor, but Athena stops that simply by moving up herself. As we know, a grounded worker requires at least three turns to achieve a win, but Athena can lengthen this turns requirement by moving up. Athena could be super annoying during most of the matchup. However the number of times to move up is quite limited, so when should we use them? Truly, you need to move up wisely, packed with your pure wisdom.

During opponent’s turn, if one of your workers moved up on your last turn, opponent workers cannot move up this turn.

This happens in the opponent's turn. During their turns, the system will check if your worker has moved up in your last turn. If so, their workers simply cannot move up, even for Pegasus and Iris. Beware that if Athena’s worker moved up during Dionysus’ turn, the power will not be activated since the moving up is not happening in your last turn. However, if you have moved up the turn just before Dionysus using your worker, your worker can still move up during Dionysus's turn, since they are your workers, not opponent's workers.

In the early game, everyone wants to be the one who is the first on level-1. For the user of Athena, you should be more eager to be the first one. Thus, as a second mover, Athena is a very good user of level-2 blocking in early game: building up every block your opponent builds to a level-2. Beware that your opponent should also be very careful on every moving-up possibility of you since it may destroy their whole set up, so they may still apply the same early game strategy on you. However in this case, it may set up a perfect environment for Athena to win in the late game. Having so many level-2’s may eventually provide too much possibility for Athena to move up from level-1, and hinder your movement.

Assuming a level-2 blocking in the early game, at the end someone (maybe Athena, or her opponent) would be blocked by workers or level-2 so they can no longer apply this strategy. In this case, as Athena, quickly build a level-1 next to some level-2’s area. If your opponent does move up this turn, he risks at least two turns of not moving up and watching you to go up hopelessly.

Moreover, Athena should not blindly move up. Your moving up is like a Hero Power, though being able to recover in the game. Only move up when your opponent can do so too. If you move up in the turn while your level-1 opponent is still surrounded by a level-1 area, you fail to show your wisdom. For a second-mover Athena, try to build two level-1’s first so that you can move up without any loss of momentum, while blocking every of your opponent’s moving-up. For example, move up to the level-1 and build a level-2. Then move up the level-2 and build a level-2 again. It can immediately bring Athena to an advantageous position.

Remember that the effect of blocking to move up is not related to the distance between workers. Even if you and the opponents are far away building for yourself, your every moving-ups are hindering your opponents. Thus, most of Athena's moves are interacting with your opponents. Unlike Atlas or Apollo, Athena does not need to stick with your opponent to interact with them. Hence, Athena is actually one of the best users of no-interaction early game strategy. With both setting up for themselves, Athena could crush most of the gods using this strategy.

This should be the most intelligent part Athena could show. As long as Athena moves up, every block you build would be an obstacle for your grounded opponent. While building up your newly built block would be super favorable for your winning, your opponent would simply ignore that block and let your other worker move up defenselessly. If your opponent is incautious of your no-interaction strategy in early game, Athena could win in the mid-game. By moving up and using a level-2 as a dome for your opponent. Here's an example:

In this case, Athena at E2 can move to D1 or E1 and build on E2. In this case, the newly built level-2 on E2 would become unreachable for your opponent. Athena will have her opponent forced to move down, cornering her winning position by a “fake-dome" at E2.

Another strategy in mid-game is to move up and build a tower next to your opponent, this may sometimes threaten your opponent since he cannot go up but only to dome your tower. For example:

For other gods, it should be still far away from winning since the opponent is standing next to two level-2’s, which means that every level-3 you're gonna build would become favorable to the opponent. For Athena, it is not the case. By going from E2 or E1, then building the tower respectively in each case, your opponent is forced to move down to the level-1 or the ground to block you instead, which puts him in a disadvantageous position. Athena can then easily win by building another tower.

If you are in a seemingly disadvantageous position in the mid-game, where both of your workers are still on the ground level. Don’t worry, an area full of level-2’s is now the best platform for you to show your wisdom. Build a safe level-1 next to the level-2’s area, while keep moving up in later turns.

Late game is super unfavorable to Athena, where both workers are on the high levels already, meaning that Athena can seldom use her power again. In this case, some players would like to move down Athena in order to use her power. Your opponent can then grab this chance and block the path of your poor inferior Athena. Athena may no longer come back to the level-2’s area. Thus, as Athena, try to win in the mid-game. As the opponent of Athena, try to bring the game to a late game where Athena can seldom use her power. In the late game, it would become a fight between gods and the powerless Athena.

If your Athena are unlucky to be in the late game, don’t give up. I do recommend you to move down so that you can use the “fake-dome” and “tower-next-to-the-opponent” strategy mentioned above again. Yet during the move-down, try to move to the level-1 that you can have n-way back to level-2’s. In this way, you can guarantee to demonstrate your wisdom again to your opponent.

Both the god of music and a monster cannot withstand the overwhelming wisdom from Athena. Apollo’s threatening strategy in the early game would become less effective, by standing next to the level-1. Athena can simply go up, saying “Hi” to Apollo while Apollo can do nothing on her! Luckily, Apollo did well in most of the mid-game Athena’s strategies especially for the “tower-next-to-the-opponent” strategy, since Apollo could simply swap the position and dome the winning position.

Athena’s moving up would be blocked by domers. Thus, during the match against domers, Athena should use her power to set up blocks so that your opponent cannot easily reach your area of focus. This would be hard since Athena is not really a good builder…

Athena’s moving up could block Pan’s winning. Under no-interaction strategy, no matter Pan is the first or second mover, Athena can perfectly block the moving up of Pan. For second-mover Athena, simply build two level-1 first. In this case you can keep going up without any loss of momentum.

Athena vs Hypnus is a good matchup. Everytime Athena uses her power, she may risk a chance of locking her worker too. Yet, under no-interaction strategy, Hypnus should be outplayed by Athena as long as Athena set up well. The two level-1’s strategy is not enough for Athena to keep moving up, try a three level-1’s strategy instead.

Persephone level-1 distracting strategy may not work well on Athena. Sometimes, Persephone can build a tower while leaving a level-1 open for your opponent, so that your opponent needs to move up to the level-1 without doming your tower. However, Athena moving up to level-1 means Persephone being not able to win too! Thus, their matchup is a fair and fun match.

Athena’s moving up power would be limited to 4 times against Hades. Yet, Hades has not much power to block Athena’s mid-game strategy.

It is easier said than done. Athena’s power is undoubtedly powerful, but it is not an easy god to play with. Setting up is more important than going up for Athena. Grounded Athena can comeback easily in the mid-game, but level-2’s Athena might actually be a joke for your opponent. Try to be ready for your wisdom every time you play Athena!

There is no perfect counter for Athena. Choosing her among the two gods available is never a bad choice for you.