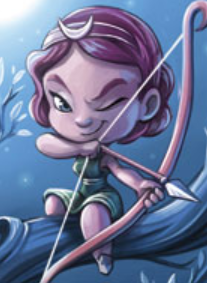 At the first glance, her power is so simple that I don’t think she is a good god. However, to all those who have faced Artemis, you should have questioned yourself: how can I win with my opponent being Artemis? With a good positioning of workers, she can just go everywhere on the board and dome your winning position! Moreover, unlike Hermes, her moving power is not confined to moving up and down, so she can move up two levels in one turn. Thus, moving down to the ground is not really a big cost for Artemis, she can simply come back within one turn. So how can we set up for Artemis or to counter her?

During your move stage, your worker may move one additional time, but not back to its initial space.

It happens in your move stage. Moreover, it is a “may” statement, so you can move one time as usual.

For most of the gods, in the early game, players usually would not build a level-1 next to your worker, or your worker can simply take the advantage by moving up. Some players love to build one space away from the opponent’s worker. However in this case, the opponent can simply move next to the new block and build up to a level-2 (level-2 blocking strategy). Thus, a player would usually build at a space where the opponent’s worker cannot even touch the new block by moving one space.

However, this strategy does not work well on Artemis. In early game, unless both workers of Artemis stay in the corner, no matter where you build, Artemis should be able come and block your path, or even take advantage of your level-1. Thus, using Artemis is like a guaranteed level-1 start: if you cannot take advantage of your opponent’s building, just move one of your workers away from the crowd and set up a new platform (I personally do not recommend this one especially facing good builders. Artemis is not fast enough to move up compared to most of the builders gods), or to use level-2 blocking strategy until you can use your opponent level-1. If your opponent is careful enough to not let you go up to a level-1, you can simply build a level-1 next to the level-2’s area, just after the turn that your opponent did the same. Your opponent may not be brave enough to go up since Artemis must be the faster one to reach level-2. You would find Artemis unstoppable to move to a higher level.

For the opponent of Artemis, I would recommend building a level-1 such that, as long as Artemis reaches that level-1, she needs to build another level-1 for you. For example, having your worker at C4 building at C5. In this case, if Artemis moves up to C5, she needs to build at B5, D5, B4 or D4, which are all accessible by you. Yes this is level-1 forfeiting strategy mentioned in the intro. Moreover, ignoring Artemis and setting up a new platform for winning is still possible against Artemis since she is never a good builder. She cannot show her power without high-rise buildings around, so you may just let her move up without threat.

It is rare that Artemis is in a disadvantageous position here. In the mid-game, using the similar logic as your early game, you should be able to have at least one of your workers on level-2. If you really played badly in the early game such that both of the workers are grounded, use your super turbo to keep building level-1 next to your opponent’s level-2’s. Your opponent should not be fast enough to block all your way to move up to level-2’s. For example, there are level-2’s on E2 E3 E4, her opponent's worker on E3 and hers on C3.

Artemis can move to D2 to build a level-1 on E1. If the opponent builds it up, just move to D4 and build another level-1. Keep moving north and south alternatively and your opponent should finally be outplayed by you, letting you to move up helplessly. Remember that Artemis only requires one turn to come back from the ground. Do not try to leave your opponent and set up some new platform. Artemis is not a good builder and can never catch up with your superior opponent.

I think this is the weakest stage of Artemis, where domes start to appear, though she is still powerful. As we know, without domes and workers, Artemis should be able to move to anywhere on the board, as long as her worker is in the inner space. Thus, the only way to protect your winning position from Artemis is by domes and your workers. However, if level-2 are everywhere on the board, leaving the crowd and building a far-away level-3 could help Artemis to secure a win.

Thus, as an opponent of Artemis, try to “capture” the corner. Using two workers and a dome is already enough to block Artemis from touching your winning tower. However, in order to defend an Artemis win, you need to separate your workers so that you won’t be left alone by the fast-moving Artemis. Try to dome the level-2 area such that you can lock Artemis in a small area.

As Artemis, try to set up the building such that level-2’s are not only concentrated on one side of the board. In order to utilize your turbo power, a straight rectangular 5x2 level-2 area is better than a square 3x3 level-2 area.

Artemis has no solution on opponents' workers blocks, unlike Apollo or Minotaur. Thus, Atlas and Selene can easily corner up a winning position by domes and their workers. Moreover, due to the lack of building power, Artemis is quite vulnerable to a level-2 doming strategy by Domers. However, Artemis could still use her quick moving ability to stay away from Atlas and Selene.

I personally like Artemis more. Hermes on the ground is easier to be kept grounded than Artemis, since using Hermes power means not moving up. However, Hermes is able to move further, and even not move or move with both workers. Thus, in the late game where both workers are on level-2, Artemis is not as swift as Hermes does. The winning key is in the early game and mid-game. As long as Artemis did well and was in an advantageous position by the late game, Artemis could easily block most of Hermes's routes.

Artemis is super effective on Pan. Pan is vulnerable to level-2 blocking due to his lack of active power. Moreover, as long as level-2 blocking is applied on Pan in the early game. That level-2’s area might become the winning area of Artemis since Artemis only needs only a single turn to rush up the level-2 and even top Santorini.

Aphrodite cannot do much on Artemis since Artemis can move to wherever, as long as her last move is next to Aphrodite. However, I did lose to Aphrodite using Artemis. The strong Aphrodite player simply separated the two workers, cornering herself at A1, building a level-3 at A2, with a dome at B1 and grounded me at B2. Due to Aphrodite’s power, my closest worker cannot dome her winning position, but needs to move to another Aphrodite’s worker instead. However, it requires a lot of setup and I still think Aphrodite would have a bad time against Artemis.

Poseidon is super brutal in early game. As long as he keeps away from you in early game, he can guarantee a win. However, it would be super hard for Poseidon to keep away from Artemis, as she is really a fast mover. Without the “moving up” constraint, a careless Poseidon player could simply forfeit the whole flourishing setup to the hand of Artemis.

Artemis is a very good god for beginners to choose, having an easy-to-understand power. However, it is still a very powerful god. Winning Artemis is usually a long effort and is in the late game. By the late game, having Artemis to move up is unavoidable, but its moving ability is still constrained by the opponent's workers and domes. As Artemis, place your workers carefully at the end of each turn such that your opponent cannot corner up their winning position. Remember to set up the buildings so that you can utilize the fast-moving ability of Artemis!

The biggest threat on Artemis are domers. Without good build power, Artemis can have a bad time against domers especially Atlas, where both of his workers can dome Artemis work, and doom her whole game. As its building power is low, try to take advantage of your opponent’s building instead!