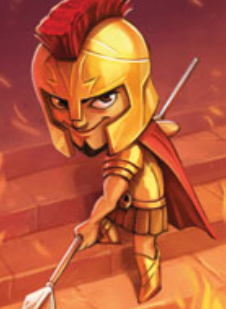 Ares is very different from other gods. While other gods are good at moving and constructing, he is good at destroying! Therefore when other gods have their workers trapped, he can free them out of difficult situations! Moreover, he is immune to double builds and corner-L to a certain degree. So how to make good use of this multi-faced god?

At the end of your turn, you may remove an unoccupied block neighbouring your unmoved worker with any tokens on it.

This happens after your build stage. You may remove a block next to the unmoved worker, so you can't remove domes, or blocks with players on it. Also, all tokens such as whirlpools on it are removed. Ares can't remove coins (Clio) or talus (Europa), as they are treated as domes.

What he does is at the end of your turn, you can remove a block adjacent to your unmoved worker. This balances it out, because otherwise, it would be way too powerful. It may seem bad, but there are certain situations where it can be great as well. Like one situation is one of your workers is adjacent to an opponent worker and he is building. You can move and build with your other worker, while removing their blocks they place every turn, never allowing them to go up. It can be very annoying. Here is an example.

Not that much change from early to mid game. By removing blocks, Ares slows down the pace of the game. As Ares you should try to stay out of the perimeter since the inner squares have more adjacent spaces and therefore more possibilities to remove blocks. Consider the following position:

If it is the opponent to move, most likely no matter anywhere he goes, he will be building in a space neighboring Ares. Then Ares can move with one worker and remove that block with another (or other blocks, if it is more important).

Another strategy you can consider with Ares is to move to a level 1 and build a level 2 next to you. Isn’t this a normal move in the game? Well yes, but in this case if your opponent builds a level 3 in order to avoid you from moving up, in the next move you can play with your other worker and remove that level 3, threatening to move to that level 2 again. If the opponent tries to prevent you again, you just remove that block in the next turn. Since you could do this forever, your opponent will eventually have to let you move up since there is no point in trying to prevent Ares from moving up.

A final remark for this section which is also valid for the other stages of the game, is that you should avoid domes, since this reduces the number of squares on which Ares can use his power.

When you reach the position where there are a lot of level 2s, what you should try to do as Ares is to remove the ones next to the opponent, making it very difficult for the opponent to get a comfortable position. As as example,

In this game, Ares can first move to d2, build on c1 and remove a2. That way, although he will lose c1, he gets a good position. Then, he can move to c2, build on b3 and remove a2 again, forcing his opponent to move to the ground. After that, it is moving to b1 and win on a1. You can see in this example how powerful Ares is.

You can think of Ares as a double builder, since he builds a block and removes one, which is almost equivalent to building twice. So these matches tend to be balanced.

The fact that Ares cannot remove domes, makes these gods especially strong. They can build domes and slowly weaken Ares’ ability. I’m not saying these games are not balanced, but if anyone holds an advantage here, that must be the domer.

Ares has to be extra careful against powers which can kill one of his workers since if Ares is playing with one worker, he is just a Mortal. Anyhow, it shouldn’t be a problem for Ares to take Bia or Medusa (against Medusa, removing blocks is incredibly useful since it will be harder for her to move up to a space neighboring Ares).

If you are able to remove blocks, you can reduce the number of level 2s and hence reduce the number of ways that Pan can win. This seems good for Ares, but playing on the defense against Pan can be very dangerous. In this matchup, Ares has to defend in the beginning, trying to get into a better position. Then, he should be fine.

The fact that Ares can remove blocks can extend the games and make them longer than usual. With Ares, you are usually playing on the defense, and annoying your opponent. It can be very difficult to win against Ares (even with two threats, Ares might also be able to defend) and you might need to play for a long time before you get a better position and are finally able to beat him.

If you like long games and torturing your opponent, then Ares is the perfect god for you! But if you prefer to play aggressive and create multiple winning threats, then Ares is not indicated for that plan. Nevertheless, it can be very hard to defeat Ares and you should make sure your power is strong enough.