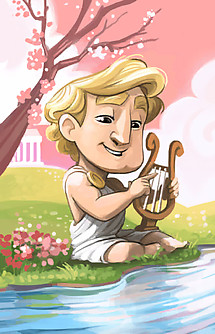 Apollo seems dumb to beginners at first. What is useful with a god that can only swap places with others? However, the truth is not like what it seems. This is because he can steal advantages from opponents and give his disadvantages to them, leaving their innocent workers in despair. In the following review, we will see when the swaps should be used.

In your move stage, your worker may move into your opponent worker’s space by forcing their workers to the space yours just vacated.

It happens during your move turn. This skill only applies when you can move to that space without that worker. Thus, you can’t move to a level-2 from ground by using this skill.

Apollo’s power is the most significant during the early game. In early game, everyone wants to at least move one worker to level-1. However, simply putting Apollo’s worker next to a level-1 would threaten your opponent not to move up. If your opponent does move up, Apollo can pull him off by swapping with him by a grounded worker. By doing this, your opponent simply wastes a single turn and would have built some block that favours your moved worker. Therefore, a smart opponent would not move up in this case. Instead, they may keep moving away from Apollo’s workers. Thus, in the early game, try to keep both of your workers next to your opponent. Do not apply no-interaction strategy, your opponent would be happy to have you not being next to him. Under no-interaction strategy, you lose Apollo’s power and may easily lose this game. Apollo is never faster than a good mover or a good builder.

Do not forget that your threat of pulling opponents off the level will no longer exist if your worker is on a higher level, so don’t be too greedy in going up at first. Wherever you go up, you should guarantee yourself to be able to move up to a level-2. Therefore, the early game against Apollo is usually a bunch of level-1 on the board, with both players waiting for the others to go up.

If Apollo is in a disadvantageous position, it would be very hard to come back since the opponent can just ground your worker and keep setting up. Apollo’s skill becomes nothing when its workers are kept away from the opponent, so remember to do better in the early game. If Apollo is in a 50-50 situation, with workers staying with the opponent’s, it could be hard for the opponent to fight against you. Since moving up to a level-2 is again a threat due to the swapping power, while leaving this area to find a better platform for winning would bring your opponent in a disadvantageous position. Thus, a 50-50 situation in mid-game is in fact very good for Apollo to set up. If Apollo is in an advantageous position, the power of Apollo actually doesn’t really matter, since you can just ground your opponent carefully and create the best condition for your win.

Apollo’s power is also unstoppable in the late game. For example, there are all level-2’s on the 3x3 space on the bottom right corner. Apollo’s workers are on C3 and E2, while the opponent workers are on D2 and E3. Normally it would be hard for you to win since the opponent is standing at the center of all level-2’s, that is, your opponent can always move up to the level-3 you newly built. However, Apollos can simply swap the worker at C3 and D2, and secure a win by building at the corner.

This would be a fun matchup. Both of the gods are waiting for the opponent to move up so that they can pull the opponent off a higher level. In the late game, the winning strategy mentioned above can no longer work on Minotaur since Minotaur movement is hard to be blocked. Anyway, Apollo has an advantage since his movement is more flexable and useable than Minotaur.

In my opinion, Charon dominates the power of Apollo. There is a very small chance that Charon is worse than Apollo, with forcing the opponent to move TWO spaces instead of only ONE for Apollo (There is a chance that Charon cannot ferry the opponent but Apollo can swap, esp. in very late game where domes are everywhere). Moreover, in the early game, Apollo’s threatening ability can no longer work on Charon. Charon can still move up to a level-1, since Apollo’s swapping power would keep his worker neighbouring Charon’s worker at the start of Charon’s turn, and hence Charon would just throw him away to a deserted place on the board and further move away from Apollo. Apollo can never be able to catch up with Charon in this case. Thus, try to avoid this matchup or Apollo would have a very hard time.

Not a big threat to Apollo but Apollo’s threatening strategy can no longer apply on Medusa. Waiting an opponent to go up to a higher level will kill your worker instead!

Poseidon is a very brutal god in Santorini. However, Apollo’s threatening strategy works very well on Poseidon. Poseidon’s flourishing set up would become your favour if you swap your position with him! Moreover, swapping with Poseidon’s grounded worker could destroy his whole winning plan.

They can easily move away from Apollo, by simply going up from the ground to a level 2. This would leave poor Apollo on the ground without any usable power.

Apollo’s early game strategy is to stick with your opponent, but sticking with Urania would be a very hard job for Apollo. The game may simply become Apollo watching the intelligent Urania going up to the level-3 unstoppably.

Apollo’s power is very useful in both early game and late game, only if Apollo’s workers stick with the opponent’s. Thus, using Apollo is a game of how to stay with your opponent while moving up with them.

Apollo could have a very hard time against jumper gods, and Charon. However, as long as the opponent is not using some good counter on Apollo, Apollo can always prove his mighty power throughout every stage of the game.