For tips on how to play pente, see Tips_pente

This capture variant of Gomoku is played on a Go board.

Players alternate turns placing a stone of their colour on an empty intersection. White plays first.

Players can capture a pair of their opponent's stones by placing one of their stones on either side of the pair lengthwise.

This BGA implementation supports a plethora of variants and player preference options.

Training mode only
Default
Other

Winning conditions of a game are displayed above the game board.

The first three options are unavailable in ranked games due to first player advantage.

Opening Rule
Description
None
Pro
Long Pro
Swap
Swap 2
The game starts without any opening restrictions.
The first stone of the first player must be placed in the centre of the board.

The first stone of the second player may be placed anywhere on the board.

The first stone of the second player may be placed anywhere on the board.

The second player then chooses which colour to play as.

Play proceeds from there as normal with white playing their third stone.
The first player places three stones on the board, two white and one black.

The second player then has three options:

Open the top-right menu from the game screen or use the 'Options' tab below the game board to access these preference options.

The player must confirm to complete their move.

Red buttons are irreversible.
Disabled: Cannot undo any move except:

Since various options can be combined with each other, here is an FAQ section to clarify rules implemented on BGA.

'Overlines allowed but do not win' option is removed, since it may lead the game into too many edge cases.

For example, when overline win is not allowed a game may end as a draw or even a defeat for the turn player.

If a player captures a stone at the end of the opponent's overline and creates a winning line, then the opponent fulfills the winning condition and can win the game. 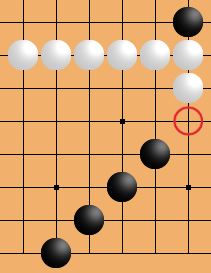 Putting a black stone on red circled intersection captures the end of White's overline, thus making a winning line for each player and the game will be drawn.

If there were no black 5 in a row, White would have won instead.

These rules apply to even teammate's self-captures, so be extra careful in team games with self-capture!

In this case, White cannot place stone on red circled intersection even the placement would capture 2 black stones.

This applies even if the placement would reach needed score to win the game or create a winning line.

In other words, that intersection is essentially 'locked' for White.

Capture three and mixed capture rules are applied to not only normal captures, but also to self-captures.

This makes things much more complex in multiplayer games.

When Red puts a stone on the red circled center while capture three is on, 2 normal captures and 3 self-captures will trigger at the same time.

As a result more than 1 player can lay claim to captured stones except left green stone and right yellow stone, which will be captured by Red.

So, who should take the other stones then?

In current implementation, the contested stones are destroyed into pieces.

In other words, no one scores for those stones and they simply vanish.

Overtime capture is only possible when the next player can prevent another player winning the game by alignment.

Currently, the implementation continues the game when a player aligns 5 or more stones in a row regardless of the situation (unless a player achieves capture win).

Then, the next player must capture (or trigger self-capture, in multiplayer mixed capture + self-capture games) and break all winning lines on the board, or pass the turn and resign.

Reducing overlines into 5 stones in a row is not considered as a legal line break, since 5 in a row still wins the game.

A player may not perform overtime line capture when:

Overtime capture is only possible at the next player's turn.

So, inserting a winning line between 2 stones of the next player triggers neither self-capture nor overtime turn when self-capture rule is enabled.

Tiebreaker is not implemented. Every player meeting the winning condition shares the victory.