This game is played on a 7x7 board with the center square removed. There are 24 pieces, 6 of 4 different colors. Each piece is a domino covering exactly two cells of the board. Both players choose pieces from a shared pool.

The goals of the game are opposite for both players. The 'Fewer' player wins a finished game if the number of distinct groups of cells of the same color is fewer than 12. Otherwise the 'More' player wins.

The game begins with the board empty, except for the black counter, which is placed on the center square: Players choose who will be More and who will be Fewer. The More player always goes first. Each turn consists of choosing one of the remaining pieces and placing it on the board, then placing the green counter on top of that piece. Note that neither player owns any of the pieces; they may choose any color to place on each turn. When placing a piece, it may be placed anywhere it fits without overlapping other pieces or the black counter. There is, however, one restriction: the piece may not be placed so that it touches the previously-placed piece which is marked by the green counter. If a player does not have a legal move because of the location of the green counter, they remove it from the board and pass that turn. Play continues until there are no more available moves.

Once no more moves can be made, the number of color groups on the board is counted. A color group is any set of one or more pieces of the same color that are connected vertically or horizontally.

For example, the following board at the end of a game has 13 color groups (numbers added for illustration purposes): 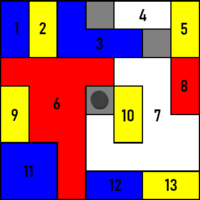 At the time this is being printed, Linkage strategy has developed somewhat and shows a slight advantage for the More player. So the following rule can be played both to mitigate this advantage, and to add some variety to the starting configuration. When beginning the game, one player starts by placing the black counter anywhere on the board. Then the other player chooses whether to play More or Fewer. Play then continues normally, with whoever is More going first as usual.