-Select any piece of your color and Move OR Capture.

-Select any piece of your color and Rotate.

Pieces can move in a straight line in the direction of their arrows (which represent sails). They can move as many spaces as they have dots. Note that pieces must maintain their original facing as they move. You cannot rotate a piece as it moves. 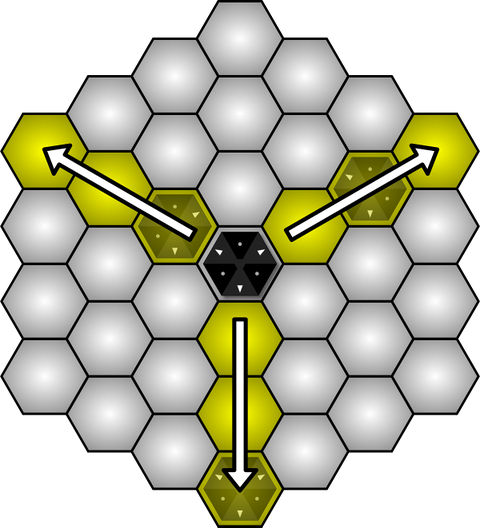 NXS pieces have some of their corners marked with bold lines. These lines represent an attack direction (cannon). The captured piece is removed from the board and replaced with the capturing piece. The capturing piece maintains its orientation (do not rotate pieces when capturing). 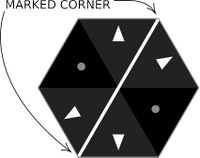 The Merchant Ship piece cannot capture (it has no marked corners), but it cannot be captured. You will find that it is the most valuable ship on the board. The object of NXS is to capture and hold enemy territory. Territory can be captured in one of three ways. The first is just by occupying the enemy board with one of your pieces. Secondly, you can make an unbroken line between your piece, and your own border (like between b and the black board edge). Lastly, you can have an unbroken line between two of your pieces in enemy territory (like between a and b below). Because there is a white piece (c) between a and the black border, no territory is captured.