Cờ tư lệnh is played with 38 pieces (19 per player) on a board that is 11 lines wide and 12 lines long. It is played on the vertices of the grid. The board is divided into two land territories by a river in the middle of the board. The three files on one side of the board form the sea.

Object of the game

When moving Planes[Af] may be shot down by the opponents anti-aircraft pieces.

A plane can commit kamikaze (capture the opponents piece) while staying in opponents anti-aircraft range; But if the plane leaves the ROF before reaching it's target then it will be shot down, and will be unsuccessful in performing kamikaze. Please see image for cases of 2 Aa pieces. 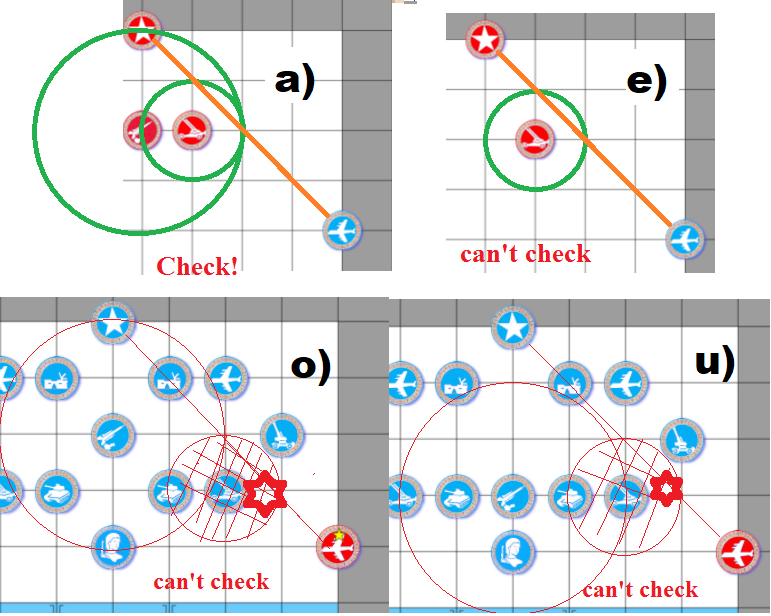 The last [Af] plane committing kamikaze against the opponents last [N] Navy will win the game, even though the plane gets shot down.

A plane can get shot down during it's own turn due to anti-aircraft pieces, when this happens a player cannot undo their turn.

Pieces capture as they move, and never jump, unless noted.

Pieces can cross the river but not occupy sea points unless noted.

[N]Navy piece may not cut across land when moving diagonally.

Hero status will mean a piece can move 1 additional space. The piece will also be able to move diagonally. [Af]Planes become stealth planes and are immune to ALL anti-aircraft.

Stack: Pieces that can carry other pieces

Stacks are a group of pieces all at the same location. They may form groups of 2 or 3 pieces.

A stack of pieces can all move in a single turn. The stack may move as a single group or any piece from the stack may instead disembark and move elsewhere. Multiple captures are possible. See the user interface section for specific instructions on moving with the stack.

The following list are pieces that can be carriers followed by the pieces and restrictions of what they can carry:

Stacks maximum group of 2 pieces (1 carrier and 1 other piece):

Both navy and land pieces may be placed on the coast. A [N] Navy has a gun and may capture a land piece, if it does then it will only capture and move if this land piece is on the coast, otherwise the [N]Navy piece will remain still and capture.

[E]Engineers may only carry pieces from the limited number of river bank spaces, and move just the 1 space across the river. All other carried stack movements with the engineer are not allowed.

On the Sea/Land border (coast) land pieces do not block the movement of a Navy piece and vice versa. So these pieces are not being jumped over. One is on land, the other is in the sea, but both are on the coast.

A commander that exposes themselves to the opponents commander will immediately lose. (Line-of-sight).

Pieces that can jump and are not blocked by ANY piece. [Af] Plane, [N] Navy and the Navy gun. [A] Artillery(but only when capturing),

Without Enforce Check, it's possible to move into check, if you do this with your commander, then the opponents piece will become heroic.

By selecting a box you will see the colour of the box change and the text.

GREEN means this is the selected piece and the piece you are currently moving.

RED means this piece is being carried and will not move separately.

GREY means this piece will move later after you have moved the current GREEN (selected) piece.

'Stay' will mean that the carried piece will disembark and stay in its current position.