Bahama Taxi is played by 2 to 4 players, who become taxi drivers in some city. They compete to gather the highest income by carrying passengers. 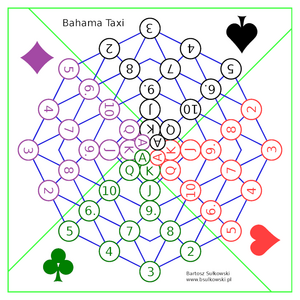 The board depicts a scheme of road connections in a city. It consists of 52 areas, enumerated with card symbols.

Congested city core, called Downtown, is reflected by areas in the middle of the board, enumerated with ranks (A, K, Q, J).

Two given areas are adjacent, whenever they are connected with a line or touch each other.

Example pairs of areas, that are not adjacent

Each player controls one taxi. A taxi is represented by a piece placed on a board area. Only a single piece is allowed to occupy a given area.

Players take turns. On their turn, a player must move their taxi to any unoccupied adjacent area.

Note: In BGA implementation, taxi movement is obligatory to make the game more dynamic and to prevent players from stalling the game, especially during late game phases.

Citizens nature has nothing to do with hurry. Whenever one of them wants to get from area X to area Y, they take their time waiting on X for any taxi to pick them up. Then they travel until dropped off at their destination Y. Passengers give no suggestions about taxi route and leave it all to the driver.

A player receive fares for getting a passenger to their final destination, proportional to the distance between areas X and Y. The distance is measured as a number of taxi movements needed to get from X to Y via the shortest route. Neither actual route nor driving time affects fares at all.

Note: In BGA implementation, meeples are placed on the lower right corner of corresponding spaces, and highlights/tooltips are added, instead of placing cards on corresponding color sides. 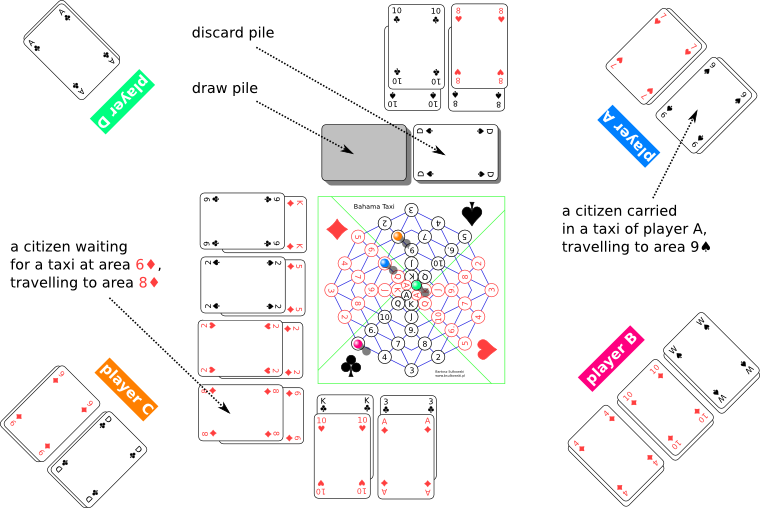 At the beginning of the game, the whole deck is shuffled and placed face down by the board, becoming the draw pile.

Each player discovers the initial position for their taxi, drawing a card from draw pile. Used cards are discarded face up on the discard pile.

A citizen waiting for a taxi is added by drawing a pair of cards from the draw pile and placing it properly by the board. This way 8 citizens are added initially. Whenever any citizen is picked up by a taxi, a new random citizen is added, but only if there are enough cards in the draw pile.

Note: In BGA implementation, a card is discarded in 3-player game during setup to make the number of cards in the deck even.

Once the draw pile runs out of cards, a player is not permitted to pick up a third passenger. They can still carry three passengers if they have been picked up already.

Note: BGA implementation marks drawn cards by gray border around corresponding spaces of the game board. If all spaces are gray-bordered, the deck is exhausted.

Once there are no more than 4 citizens waiting for a taxi, a player is not permitted to pick up a second passenger. They can still carry two passengers if they have been picked up already.

As soon as there are no citizens waiting for a taxi, the game is over and players’ income is compared. A player does not receive any income for passengers left in their taxi.

Note: The game also ends automatically when all players drop off all passengers while there is only a single passenger waiting a taxi. Since the last passenger cannot be dropped off, this game end does not change the end game result.

BGA implementation supports variant rules which are not included in original rules.

Players may undo taxi movements up to 5 times per turn.

In all variants, a taxi must move at least once and cannot return to (or stay in) its starting space.

A taxi must stop movement first to pick up or drop off a passenger (unless 'Pickup before movement' variant is on). No further movement is allowed.

BGA implementation of Bahama Taxi and variant rules are derivatives of "Bahama Taxi" by Bartosz Sułkowski, used under CC BY 4.0.