• The common Lotus Board has 7 coloured karma spaces for the face down Plenitude Tokens. Each token shows a value from 1 to 4, which indicates the number of plenitude points that a player wins when they have harmonized the corresponding Chakra

• The bottom half of the lotus board has three vertical streams of maya flow holding the energy gems.

• Each player has 5 black inspiration tokens and one randomly allocated coloured meditation token which allows them to see the initial value of one plenitude token.

Reach the highest level of plenitude by placing three energy of the right colour on the corresponding Chakras.

During their turn, the player performs one of these 3 actions:

The player takes 1, 2, or 3 energy of different colours from the same Maya Flow (vertical column).

If a player wants to take energy from a flow that shows at least 1 negative energy (black gem), they must take it, with or without other energy gems of different colours.

All the energy that a player has taken must be placed in the same location:

• either on the Bhagya Bubbles, above the purple Chakra; each bubble can hold only one energy;

Then, they perform the corresponding action.

• All the moves indicated by the chosen action must be performed. If it is not possible, this action cannot be chosen.

• A move is allowed if there is a free space on each Chakra that you cross and/ or reach.

• The indicated moves are not simultaneous: the player chooses in which order they are performed.

• If a Chakra is harmonized (entirely filled with energy of the same colour), one energy can “skip” this Chakra without counting towards the moves performed.

1. Move three energy gems down by one Chakra.

2. One energy down by two Chakras, and another energy by one Chakra.

6. In the desired order, move down one energy and move up another energy by one Chakra ( ).

7. Move one energy up OR down by one Chakra.

8. Discard one alleviated energy (a black negative energy gem at the lowest position), and then choose one energy. You must place it in an available Bhagya Bubble at the top.

A Chakra is harmonized when a player has collected 3 energy of its colour on it.

Important! If an Inspiration token was placed in the notch next to the harmonized Chakra, the player immediately takes it back.

When a negative energy (black) reaches the “earth” (the area under the red Chakra), this energy is considered as alleviated. The number of alleviated energy that the “earth” can hold is unlimited. Each one is worth 1 point at the end of the game.

When a player meditates, they perform these 2 actions:

Important! Meditating does not allow a player to take back the Inspiration tokens placed in the notches next to the Chakras.

They choose a new coloured Meditation token, place it on their individual board next to the same-coloured Chakra, and secretly look at the corresponding Plenitude token.

Note: a player can meditate even when all their Inspiration tokens are not used.

End of the Game

The end of the game is triggered when a player has at least five harmonized Chakras at the end of their turn.

The current round is finished, allowing all players the same number of turns (check the First player token for a reminder).

The 7 Plenitude tokens placed on the Lotus board are revealed and each player counts their plenitude level.

• 1 to 4 plenitude points for each harmonized Chakra;

• 1 plenitude point for each alleviated energy; (Note: any negative energy still on the player’s board do not count as negative points.)

• Harmonization bonus: Each player counts, on their board, the number of aligned harmonized Chakras, from the bottom to the top. The player(s) with the most Chakras thus aligned gain(s) 2 plenitude points. 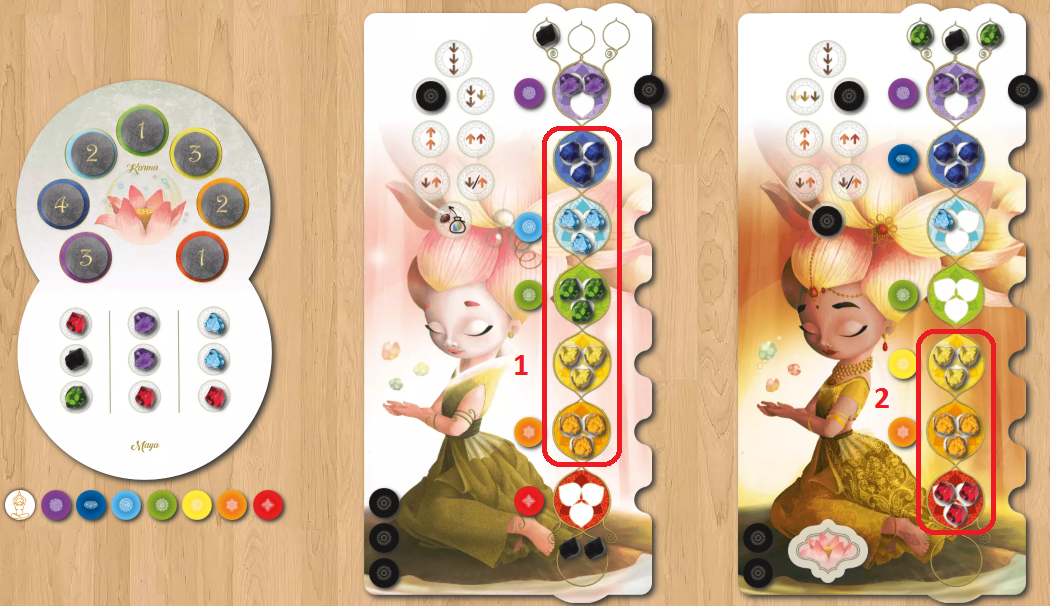 • Harmonization bonus: 2 points (Note: although the first player has formed a sequence of 5 aligned harmonized Chakras, that set doesn't start from the bottom. The second player starts his sequence from the red Chakra, counting as the player with the most Chakras thus aligned and gain 2 plenitude points)