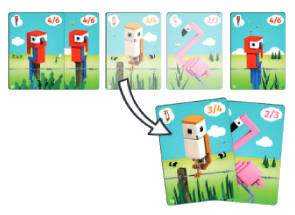 If a player collects either 7 different species, or 2 species of at least 3 birds, they win.