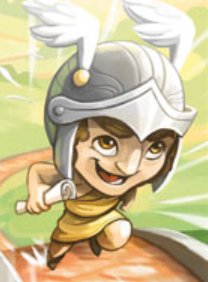 Though having quick feet, Hermes do not have a strong muscle for his feet to jump easily. I thought he was one of the overpowered gods when I was on the first few days playing Santorini. However, the moving constraint is really a great limit. You cannot walk up straight to a tower from the ground, or you can’t ground yourself and move far away from the level-2 in hope of doming a dangerous tower. Most importantly, unlike other movers Artemis and Triton, you can only move up as long as you are next to a higher level in the start of the turn. Thus, Hermes is in fact vulnerable to be grounded. As long as Hermes is in a disadvantageous position, his opponent can easily ground him and achieve victory.

Anyway, Hermes does have his advantage. The most valuable part of Hermes is that as long as both of his workers do not move up or down, they can both move and either of them builds. Thus, if Hermes is in an advantageous position, he can use worker-block well, by adjusting the position of his worker to corner up the winning position. Moreover, he can build without moving. It also means that Hermes is invulnerable to corner-L strategy, since he can simply stand at the corner of the L-sign and be the protector of the corner winning position. With this, we will try to establish some useful strategy that Hermes may use. Be ready to show his speedy nature in the whole game?

In your turn, if your workers do not move up or down, they may each move any number of times (even zero), and then either builds.

This only happens during your move stage. If you choose not to move up or down, each of your workers may keep moving, even back to the same space (unlike Artemis). Therefore, after you have moved the second time of your workers, you can no longer go up or go down. If you have moved up or moved down in the first move, you immediately need to build with your moved worker, since it means you do not activate your power so you just follow the game rule. Moreover, if you activate the power, you can choose which worker to build. Therefore, you can move with worker A and build by worker B instead.

What you might want to do is start blocking every level-1 they place. This is easy since Hermes can move anywhere. His limit is that he can’t move up or down and then move unlimited times. However, beware of worker’s block since Hermes is not a pusher like Minotaur and Apollo. Those level-2’s might become obstacles for Hermes to continue blocking. There is a cool thing about Hermes, which has been mentioned above, he can build without moving. That is pretty cool. If your opponent’s building plan is bad, you may be able to keep blocking until it gets down to the last few spaces. Then there is no way for them to get up, so they are trapped and lose due to not being able to move. Recall that Hermes can build without move, so he wouldn’t get stuck in this case.

However, a good building plan could actually ruin Hermes level-2 blocking strategy, so this strategy usually doesn’t last long. Yet, this is still favorable to Hermes mid-game, which will be mentioned later.

A more safe early game strategy is instead moving up one of your workers first, and extending the area of level-1’s such that you can utilize your power to move infinitely on the same level. Keep another worker on the ground for defensive purposes, to level-3 block other’s level-2, such that you gain some chance to extend the area of level-1’s. With correct planning, this strategy should bring at least one of your workers to level-2’s. If not, Hermes would have a very hard time in the mid-game and late-game.

As aforementioned, Hermes needs to do well in the early game. He has a huge moving-up constraint, so he will have a hard time if he fails to move up in the early game. The superior opponent may simply ground you forever and easily corner up a winning position.

Thus, the disadvantageous position of Hermes in mid-game seems uninteresting to investigate. We will instead move on to the 50:50 and advantageous position of him. The 50:50 position of Hermes is one of his workers sticking with the opponent, while one of them is below for defensive purposes. In this case, try to always stand next to your opponent to avoid any workers block and the possibility to create some aggressive tower.

In the following examples, we will show how complicated using Hermes is. We need to be careful on how moving up affects our aggressive and defensive possibilities, and the final position of Hermes at the end of the turn.

As we know that every level-1 can become a tower by Hephaestus in no time, but due to the positioning of the grounded Hermes, he can swift through to dome any tower other than C3 and E3. Thus, in this case, the level-1 Hermes can move up to E3 or E4 since the defensive job can totally be done by the grounded Hermes. Moreover, this moving up will threaten Hephaestus to move closer to you since you may grab the winning chance at E5, the corner. For the grounded Hermes, he can move up with no cost since moving up instead opens up more possibility of defense, from 23 spaces to 25 spaces now (which is the whole board). These two move-ups will open up both room for defense and attack.

Thus, using Hermes requires to study the possibility of your move in the three different levels. Like in the above example, level-1 is a better platform for Hermes to defend, so Hermes should move up to level-1 instead of being grounded. However, beware of workers' blocks. In the above example if Hermes are on level-1 and level-2, Hephaestus workers locating at D2 and E2 may in fact corner up a winning position. Thus, Hermes at level-1 should quickly build at D1 for defensive purposes. This move allows Hermes to be swifter on the same level.

Other than the above mentioned, Hermes should be careful of his final position. Using the similar example as shown,

As Hermes as a first mover, we know that Hephaestus can move the level-1 worker to D2 and build a tower at E1 in the next turn. This is now not defendable by the grounded Hermes due to the additional level-1 at D1. Thus, the grounded Hermes should move to C1 or C2 at the end of the turn. If you choose to move to C1, you can actually still move the level-2 Hermes and build by him, which keeps your aggressive momentum.

To conclude, the mid-game of Hermes is in fact how to extend your evenly distributed area, while being careful of your final position of Hermes. Better not having several areas of focus but one main area of level-1’s or level-2’s would be super favourable to Hermes power. Conversely, the opponent of Hermes should create some unevenness on the board, such as using level-2’s to corner up winning positions from a level-1 Hermes. Check that both examples given by me are in fact favorable for the movements of Hermes, consisting of a big area of level-1’s.

Like Artemis, as a mover, the late game with many domes could be hard for Hermes. The existence of domes may destroy the evenly distributed area. It may become inevitable for Hermes to move up or down. Again, if you successfully create a big area of level-2’s here, you possibly win since you can easily corner up a winning position by moving both workers. Moreover, Hermes in fact is very good at using dome to corner up winning positions. Check the following example, it is a very common strategy by Hermes:

In the given set up, Hermes can simply stand there and keep building at A1, and finally secure a win. Yea, this is exactly the power of building without moving mentioned in the intro of Hermes. This power is super useful during your set up to top Santorini.

Defensively, again, Hermes should be careful with his final position, to prevent your opponent from cornering up the winning position. Defensive jobs should be easy as long as there are large areas of level-2’s. Thus, the counter of Hermes and late game is easy: Try to build some tower that forces Hermes to move down. It then wastes Hermes one turn to come back and may easily win the game.

There is a specific strategy to counter Hermes, namely level-1 blocking. You can use level-1’s to block Hermes from reaching your area of focus. If Hermes comes to those level-1’s in the next turn, simply build them up to level-2’s. This job can be easily done by Demeter. Demeter can quickly fill the board to become very uneven.

Other movers do not have move up constraints, so Hermes would be slower to move up to the area of level-2’s. In this case, try not to apply level-2 blocking in the early game. Instead, you may simply use your grounded Hermes to defend all towers, while moving up with your other workers. This strategy is ok since Triton and Artemis are not good builders, where they cannot build two-way towers for guaranteed win.

Atlas is speedier to dome compared with Selene since he can dome with both workers. With correct positioning of the domes, unevenness can be introduced to the board and disallow Hermes from swifting through the board. However, those domes may easily help Hermes to corner up winning positions using his power of building without moving.

Using Hermes requires a good planning of the board set up to utilize his speedy nature. By playing more using Hermes, one should realize that building without moving is really super powerful and usually secure a win for Hermes. However, you need to be super careful on every position at the end of the turn, and especially every move up. It is not easy for a beginner.

To counter him, it is not easy though. There are too many possibilities for Hermes’ moving and building options. Thus, the opponent of Hermes also requires to be super careful, to prevent a surprise win by moving both workers or none of them.

A sad tier rank but it is still strong, especially when against a beginner, who cannot easily figure out all possibilities by Hermes, and lose the game surprisingly. When Hermes is fighting a careful opponent, he might have a hard time as the way to counter him is quite clear and solid. (Create more level differences!)