The rug market in Marrakesh square is on tenterhooks, the best salesperson will soon be named.

Each salesperson tries to have the highest number of rugs visible at the end of the game while also amassing the biggest fortune.

1. they move Assam,
2. if necessary, they pay their opponent,
3. they then lay one of their own rugs.

The player then throws the dice: the number of slippers indicated on the dice determines how many squares Assam is moved.

Assam moves in a straight line (not diagonally) in the direction initially selected.

If Assam leaves the market, he follows the about-turn signalled by the swirls at the edge of the board. His movement off the board doesn't count towards the number of steps he takes.

If Assam ends his move on an opponent's rug, the active player must make a payment to that rug's owner, equal to the total connected area of that rug colour in squares. (Squares are only connected if their sides are touching, it does not count if they only touch diagonally.)

Example
Here Assam has landed on an area of five yellow squares, and the active player must pay the yellow rug owner 5 dirhams. 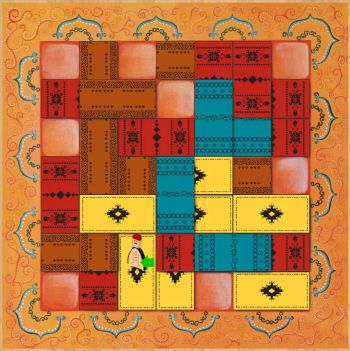 A rug cannot be placed to entirely cover an opponent's rug. It can only be placed on two empty squares or an empty square and half a rug or two halves of two different rugs.

The game ends once the last rug is laid.

The game also ends if all players except one have been eliminated by not being able to pay when requested. In this case, the remaining player is declared the winner.

In the two-player game, each player receives 24 rugs, in two different colours. These are shuffled into a single draw pile, and each turn, a player will be playing a rug of a random colour.