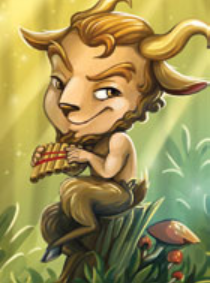 For beginners, Pan seems to have a huge advantage: his additional winning condition is quite easy to achieve if you put effort into it. However, when they try it out, they usually end up getting stuck on the ground or first floor. Why? The reason is simple. He does not have any active power. Opponents can easily apply level-3 blocking on him and he will be stuck in the level-1 forever. Moreover, since he has no active power, when it comes to defense, what he can do for his best is to be aggressive. ATTACK IS THE BEST DEFENSE.

In your move stage, if your worker moves down two or more levels, you win.

This power happens in the move stage, which is the same as the usual win, where you move up to the level-3. Hence, this power is affected by Hera where “you cannot win by moving into a perimeter space”. Moreover, you can win by falling from a level-3 to level-1 or the ground. Remember that you can be staying on a level-3 without winning when you are against Minotaur, Hera, Charon, etc. In this case, simply dropping to a level-1 or the ground can win you the game.

Remember the turns requirement for each god to win? Hephaestus requires 4. Demeter 5. Most of the gods require 6. Is Pan a fast winner among them? Yes. He requires 5 turns to win. Thus, Pan can usually control the pace of the game. In the early game, someone likes to apply level-2 blocking on Pan, while some likes to apply no-interaction strategy. In my opinion, both are not a good choice. Instead, try to stick with Pan but you don’t really need to block his level-1. There are several reasons. Firstly, If there are too many level-2’s on the board, a careless move that helps Pan to corner up a safe level-1 may lose the game, since Pan will have n-ways to move up further, and being on level-2 usually leads to a Pan’s win. Secondly, if you apply no interaction strategy, you are never faster than Pan unless you are double builders like Hephaestus and Hestia. Even for Hestia and Hephaestus, Pan can have one worker to defend your move, while one worker to be moving up. In this case, Pan can still win the game. Do not forget that Hephaestus standing on level-2 facing a level-3 can be easily defended by doming the level-3, while Pan standing on level-2 facing several ground spaces is a MUST WIN.

If your opponent sticks with you in an area of level-1’s, we can proceed to the mid-game and explore further.

Here we only focus on when the opponent sticks with you in an area of level-1’s, as I think this is the only interesting case I need to investigate. Since there are no level-2’s available on the board, Pan cannot have an n-way up to level-2, while every level-2 will be easily blocked by level-3 blocking. Here, for Pan, seize this level-3 blocking. Try to have your opponent blocking the spaces that are next to the corner, especially B2, B4, D2, D4. Doming these four spaces can block most of your opponent's convenient path and you may easily corner up a safe level-2 and win the game. For Pan, try to build safe level-2’s on these 4 spaces and force your opponent to block them. For Pan’s opponent, try to stay neighboring with these four spaces, while on a level-1, so Pan’s building here will simply let you go up, instead of blocking these spaces. Moreover, do not actively build level-2 or else Pan may easily create an n-way to level-2’s. Here we have an example:

As the opponent being the first mover, if its worker still stays here during the end of the turn, Pan can move to D3 and build at D2. This forces the opponent to level-3 block him. By then, the corner D1 E1 E2 may become a perfect place for Pan to set up his safe level-2. Thus, the opponent of Pan should set up an area with more level-1’s. In this case, Pan can hardly corner up his level-2. Someone may feel like an area of level-1’s will help Pan to go up more easily. However, as long as you keep applying level-3 blocking on perimeter spaces of Pan’s level-2’s, a large area of level-1 instead makes Pan’s power useless, since he can never win by moving down! Thus, winning Pan could be a long game, but try to be patient and beware of the positioning of your worker. Do not let Pan easily corner up a level-2!

Actually I do like to omit this stage for the investigation of Pan, since Pan seldom reaches the late game, unless fighting domers, where domes are placed everywhere on the board so the game quickly turns into a late game situation. For a symmetric late game, where there are so many level-2’s and no much ground available, I believe Pan has lost since he got no power fighting against the opponent. For an asymmetric late game where level-2’s only concentrate on one side of the board, it would be more interesting to look into.

In the earlier stage of the game, I keep mentioning level-3 blocking on Pan, while winning the game requires to move down a level-2 or move up to the tower. Why do we need to be so desperate in blocking Pan to go up to a level-2? Alright, I have not mentioned how disastrous is Pan standing on level-2’s, so let me talk about that in this part, considering Pan and his opponent are in a big area of level-2’s...

As Pan being the first mover, Pan can move to E3 and build at E4, then move to D4 to secure a win. As Pan is the second mover, just try to move to the edge of the level-2’s while doming your opponent’s tower. So you can see, the 50:50 situation in a normal situation becomes super favourable to Pan. This is the power of Pan.

Thus, just block his level-2 as if he is moving up to a level-3!

These can apply level-2 blocking on Pan and easily use the level-2’s area to set up. Moreover, they super turbo can help them easily block Pan’s move-up, and Pan can hardly corner up his level-2’s.

Chronus finally finds some winning chance. Level-3 blocking would be even more dangerous on Pan since Pan cannot move up, while complete towers could help Chronus win. For Chronus, stick with Pan on an area of level-1’s. Don’t actively build level-2, or else Pan may easily create n-way up to the level-2. This would be a fun and fair match.

The match between Pan and the other gods is usually Pan who controls the pace of the game. Every god is unwilling to build a level-2, while blocking every level-2 that Pan is going up. For the match against Eros, the thing is quite different. Eros requires 3 turns to win, which is super fast and Pan definitely needs to defend, but the defensive power of Pan is super bad so I believe Pan would have a hard match against Eros. Though there is still a chance for Pan, so this choice is still okay in Tournament Setup.

It is a fun match. Hera can prevent Pan from winning by moving to a perimeter space. While inner space is usually full of level-1. Does that mean Pan would have a hard time? Not really, Pan can move up to a level-3 on the perimeter space and move down to a level-1 on the next turn to achieve a win! Thus, this is a fair and fun matchup.

The winning turns requirement for Pan becomes longer when he is against Hypnus… Pan needs to have two workers to be on level-2’s, and then move one of them to the ground. It requires a very long effort and usually Hypnus has already achieved victory. In this case, Hypnus can simply apply a no-interaction strategy and build for his own victory. Pan’s best defensive weapon: being aggressive can no longer be useful against Hypnus. Pan would have a super hard time here.

Many beginners complain that Pan is OP. Frankly, Pan is an insane god for a beginner since playing against him is counter-intuitive. We need to desperately apply level-3 blocking which we may not do so often. However, if you have the sense to destroy Pan’s level-2 patiently and planfully, you can easily defeat him with your god power. Remember that Pan is bad at defending. The common winning strategy like Corner-L should perfectly defeat him. However, can you keep yourself safe in front of his overwhelming level-2’s? If you do, you acquire the key to defeat Pan.

Though being counterintuitive to play against him, after being accustomed to strategies to play against Pan, you should possibly achieve a win finally in the late game. Just be patient and Pan can do nothing on you in the usual late game.