Begin your turn by drawing and placing a tile. Choose from one of two options: 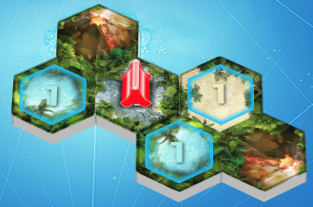