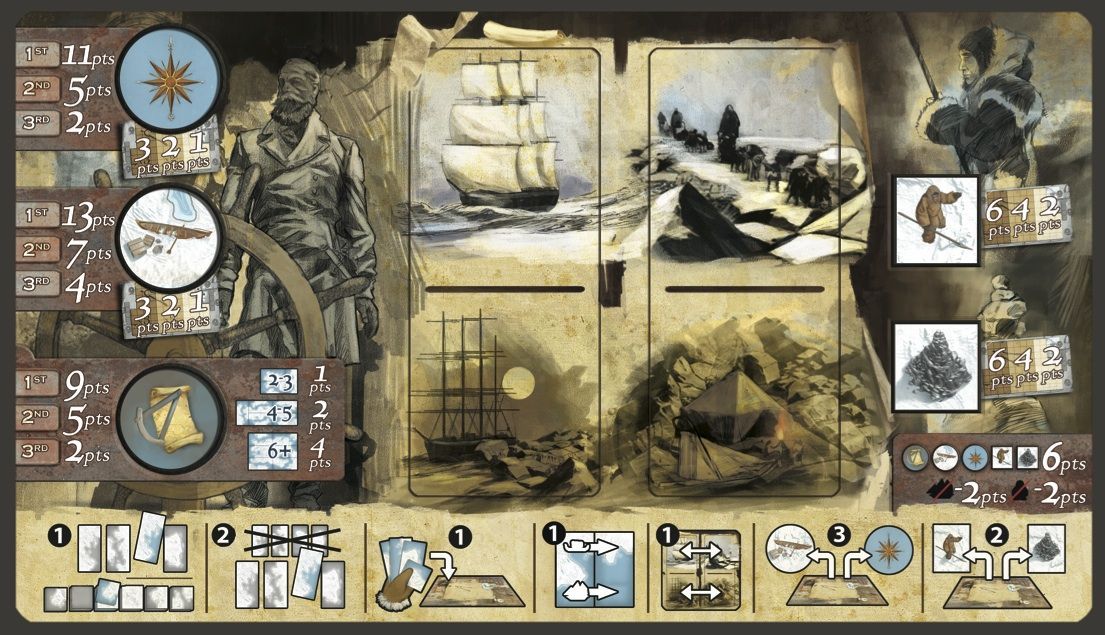 Looking for the Franklin Expedition

In 1845, Sir John Franklin led an expedition on behalf of the British Royal Navy to find and explore the last portion of the Northwest Passage. They sailed into unknown waters, and no-one ever heard from them again... Players must venture into these hazardous Arctic waters in order to discover Franklin’s fate and succeed where he failed: by finding the Northwest Passage.

In the game, prestige is awarded for exploring islands and straits, getting information from Inuits or Cairns about the Franklin Expedition, finding shipwrecks of the expedition, and for being among the first to find their way up to the Northwest Passage and back to Groenland. The player with the most Prestige points at the end of the game is the winner. In case of a tie, the first tied player to have returned to Greenland is the winner.

The game is divided into ten rounds. At the end of each round, the sun moves one spot counter-clockwise. Water above the sun is now ice, and water below is now sea.

During one round, each player will take up to 7 actions, in turn.

During one turn, one player can play one or more actions. However, all additional actions (beyond the first one) will cost one more crewman than normal. In order to stop playing more actions during one turn, click the blinking [End Turn] at the top of the screen.

At the end of the round, all used Crewmen move back to «Available».

The next turn order is the order in which players used their last crewmen (or passed). This is shown by the turn order markers at the top left of the board.

<Click on the chosen tile at the top of the board.>

<Click on the tile from your hand, rotate it or flip it as fit, and click on the white marker on the board.>

Take a tile from your personal reserve and place it on the board with the following conditions:

An island is complete when the land areas of at least two tiles are completely surrounded by water or the edge of the board. In case a player completes one or several islands, they get one Cartography token, and Prestige points according to the size of the island.

<Click on the back arrows on the player board>

Crewmen are moved from/to the ship/sled, thus deploying or taking back the sled into the ship. Taking back crewmen in the ship can only happen if the sled and ship are on the same tile. Both active and resting crewmen can be transferred.

<Click on the ship or sled, then on its destination.>

Ship Movement: The player moves their ship onto one adjacent tile linked to the tile it currently occupies by a sea passage.

Sled Movement: The player moves their sled onto one adjacent tile linked to the one it currently occupies by a land passage. The Sled cannot cross the sea unless it is frozen.

Multiple Ships and Sleds can be on the same tile.

A frozen tile is unreachable for a ship. If a ship, due to a season change, finds itself in frozen waters, the ship is blocked in and will not be able to move until the thaw. A frozen tile is considered to be entirely composed of land, so a Sled can move freely on it.

Explore a Franklin site or a Strait

1 prestige point is awarded for the discovery multiplied by the zone multiplier (x1 / x2 / x3), and additionally, points are awarded at the end of the game for the players having the most bonuses of a given type (see tooltip).

Discover an Inuit or a Cairn

2 prestige point is awarded for the discovery multiplied by the zone multiplier (x1 / x2 / x3).

End of the Game

The game ends either: at the end of the Action Phase of the tenth round or if all of the Expeditions have returned to Greenland.

In addition to the point earned during the game, players receive more Prestige points based on the tokens they picked up along the way.

Point are awarded to the player(s) with the most, second most, and third most Shipwrecks, Straits, and Cartography tokens. The point distribution is 13, 7, 4 for Shipwrecks; 11, 5, 2 for Straits; and 9, 5, 2 for Cartography.

Each set is composed of one token of each Discovery type – one Inuit, one Cairn, one Shipwreck, one Strait, and one Cartography token. Each set gives a bonus of 6 prestige points.

Each Sled and/or Ship which did not return to Greenland before the end of the tenth Exploration season is lost. When a Ship or a Sled is lost, all of the crewmen in the corresponding column are lost with it. Every lost Ship and/or Sled gives a penalty of -2 Prestige points for each corresponding lost Crewman. An abandoned ship gives a penalty of -2 Prestige points.