These are some tips on how to make wiki rules pages display in a readable way on the BGA site beneath a game, with some notes on elements which do not work as expected, and useful elements which don't appear to be documented anywhere. Many tags and methods of formatting are completely stripped out by the BGA website when displaying wiki ruleset, but there are some workarounds. Note also that some elements display differently depending on whether you're reading the rules at the bottom of a live game page, or on the game's "about" page.

(This page was created as a result of this forum thread. A bug report to make bullets visible within the rulesets on the BGA interface has been open with no response since April 2020.)

The BGA rules display strips all bullet points, if the regular wiki bullet markup of asterisks is used.

A common solution seems to be to add bullet-point unicode symbols, or hyphens. This also requires lines to be separated by paragraph breaks or <br/> tags, or to be used in addition to asterisked bullet points, otherwise all the points appear on the same line.

";Term: Definition" wiki markup lists don't bold the terms or indent the definitions in the BGA view, making them much harder to read. A workaround is to manually bold each term, eg:

Six-sided dice can be displayed during a line of text using the whiteDie template, eg. {{whiteDie|=6}}.

It looks like they have line breaks around them unless the sentence they are part of has a bullet, numbered list element or ":" indentation at the start, in which case the text flows before and after the die. For example:

When viewed on a game's about page: All rules are in a single box, with level two through four headings both being bold fonts in their original cases. Level two headings are slightly larger than the other two.

For example, in the rules to Hardback are marked up as:

which will be rendered during a game as: 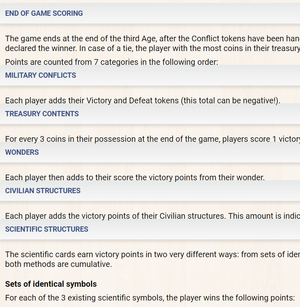 Some game rules, including Gamehelpjumpdrive and Gamehelpspacestationphoenix, use keywords such as [METAL] and [PLANET].

When a player reads these rules during a BGA game, these tags get converted into icons. When the player reads the rules on the game panel page or the wiki, they remain as text.

This feature seems to be undocumented, and has been confirmed as a custom option that a developer can choose to create for a game.

Attempting to specify an image size in image markup (eg. [[File:Marrakech example.jpg|300px]]) will work in the wiki view, but will cause the image to appear blank in the BGA view (as it tries to display a resized image which does not exist in the directory it's referencing).

A solution is to display images at the default size (meaning that they must also be uploaded at the size you want them to appear), eg:

It's also possible to add rollover text if desired:

Also, external links will also work within BGA if you want the image to link to a URL:

Click through to the templates above for usage instructions.

Linking to a section within a rules page (eg. [[#endgame|the Endgame phase]]) will work within the rules on a live game, but not on the gamepanel page (eg. https://boardgamearena.com/gamepanel?game=hanabi#Black_Powder). If the user clicks on such a link on a gamepanel page, the page will simply reload without taking them to that section.

Like bullet points, a numbered list in wiki markup (with a "#" before each line) doesn't display correctly. Workarounds are to write out the numbers by hand, with either paragraph breaks or <br/> tags between them:

Table borders are stripped by the BGA display. They can be added back by adding a fixed width border= to the image markup, eg:

Tables default to 100% width on the BGA view: if you want to override that, you can do so by adding something like style="width:10%" after the border="2".