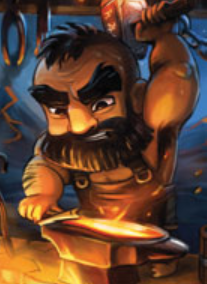 Hephaestus is one of the gods that I think his power actually matches him. Having his leg hurt, Hephaestus is good at smithing however. His smithing power is shown by his brute force building power, and also due to this, Hephaestus seldom requires to move from corner to corner, which matches the immobile feature of this god. Usually, you can see Hephaestus' opponent running from corner to corner like a mad animal, just in hope of stopping this immobile worker from topping Santorini. Hephaestus can build twice, but must be in the same space. Some beginners might use it in a wrong way that in fact blocks themselves. Yet, after acquiring some more experiences in this game, one may know that this power is in fact super brutal, and you won’t dare to leave Hephaestus alone. If you carelessly pay no heed to this immobile god, you may end up watching him standing on level-2’s, while blocking every of your way to go up and finally topping Santorini.

In your build stage, your worker may build one additional block (not dome) on top of your first block.

Try to calculate this. On a new board, without any interaction with the opponent, which god can go up to the tower within the least turn? Artemis requires six, Demeter requires five, Hephaestus? FOUR, which is the lowest possible in the game. That’s why I call Hephaestus a brutal builder. In the early game, Hephaestus would like to build for his own victory since no one can be faster than him, as long as he is the first mover. If you are the second mover, and your opponent is not a brutal builder like Poseidon, you can simply build for yourself again, since you would also be faster to achieve the win. Therefore, Hephaestus' opponent would usually use level-2 blocking on him, building up every level-1 Hephaestus built, just to prevent him from going up. Thus, the early game of Hephaestus might become a game of stopping this smithing god from moving up. If your opponent applies level-2 blocking on you in the early game, just try to move with both of your workers strategically, while using your power to build some level-2’s to block your opponent’s way, especially when you are against Bia. After several turns, one of your workers may finally become free from opponent’s watching, and get up to a level-1.

Thus it seems to be meaningless to build up so many level-2’s while finally letting you go up to a level-1. It then raises the chance of you to go up further. Some opponents may just let you move up to level-1, while doming or level-3 blocking all your level-2’s. In this case, be aggressive. Even if your opponent domes your tower, those domes may finally help you to corner up the winning position. A fast pace is usually good for Hephaestus. Try to use both of your workers. Separately build their own area of level-2’s or cooperatively build one area of level-2’s.

Hephaestus' power should not be used as a defensive power. First, he cannot build a dome to block the level-2. Secondly, he is bad at ungrounding himself, since his building power is constrained to be in the same space.

If you managed to reach level-2, the mid-game starts here.

If you are in a disadvantageous position here, I bet Hephaestus can hardly come back since as aforementioned, his ungrounding power is very bad. Moreover, his power can’t help him to dome the level-2 built by the opponent, so you can simply do nothing but watching their workers teasing you superiorly.

If you are in an advantageous position here, I bet Hephaestus can hardly lose this match. You should know that being aggressive doesn’t mean to build some level-3 that is easily domed by your opponent. Instead, you should quickly extend your area of level-2’s simply using your power. Remember the level-3 blocking in the early game? If your opponent did so, try to move your level-2 path to those towers and yield your win by a two-way level-3. Alternatively, if there are domes nearby, try to move your level-2 path to corner up your winning position by staying with those domes. Corner-L strategy may work here.

If you are in a 50-50 matchup, it is still good for Hephaestus due to his brutal building power. Any level-1’s can become towers in no time. Thus, you actually create a big pressure on your opponent. Moreover, since you can use level-1’s more effectively than others. In the early game, your workers may try to separately build some level-1’s for the mid-game usage. If you did so, your level-2 workers can just extend the level-2’s path to the area with level-1’s. Your opponent surely will be threatened to stay with you. If they fail to, you win the game. During these moves, don’t be careless that you in fact leave a winning possibility for your opponent to grab.

As I said, the categorisation of stages of game is quite abstract. For Hephaestus, since the board will quickly be filled by level-2’s, the mid-game is already like a late game. In the late game, you should also grab the chance tower up some level-1’s on ground. This is what other gods cannot do. If you are in an area of level-2’s instead, Hephaestus isn’t a powerless god. Try to corner up some level-2 and threaten your opponent to block. Under some good set up, if your opponent does block you, he or she requires to build some level-3 that is accessible to you. For example:

In this case, you should realize that by using workers block. You should be able to corner up A4 and C4 and secure a win, or force Demeter to go down. As a first mover, Hephaestus should immediately take the position of B3, but where to build?

In fact the correct choice is building twice on A4. By doing so, Demeter must be threatened to block A3 by her worker, or else your worker can easily corner up the winning position by standing at A3 and B3. However, since you have built twice on A4, Demeter reaching A3 means Demeter is surrounded by level-2's, and is forced to build a level-3 for you. In this case, what can Demeter do is to build a level-3 on C1, in hope of postponing the death of her.

Hephaestus is one of the best users on no-interaction strategy. Hence, Apollo could have a hard time sticking with him in order to use his power well. As long as Hephaestus moves up to a level-1 without neighboring Apollo, Apollo may be forever unable to catch up with him.

Charon ferries opponents without level constraint, so Charon should be still good against Hephaestus.

Hephaestus’ early game requires distraction on opponents’ workers. However, it might be very hard against these gods, especially Hermes. Thus, the early game of Hephaestus may need altering. Try to use level-1 forfeiting strategy. Just stick with Hermes and be ready for a good mid-game play against him.

Both are also fast winners, and good users of no interaction strategy. However, Pan's winning could be harder to block compared with Hephaestus. Pan may simply block Hephaestus from winning by using one worker, while winning using another worker. In this case Hephaestus may need to stick with Pan instead.

Bia could have a hard time against Hephaestus. Hephaestus can go anywhere as long as he applies level-2 blocking to prevent from being killed by Bia. One should really avoid this matchup in tournament setup.

Hephaestus usually wins the early game by separating his workers, but this shouldn’t be done against Circe. In this case, level-1 forfeiting strategy may again be used by Hephaestus.

They are not vulnerable to Hephaestus level-2 blocking and can stay with Hephaestus on the level-2 areas without any contribution to the flourishing city. Hephaestus should still have a fair match against Pegasus due to his brutal building power. He can corner up his winning position easier than Pegasus can. For Iris, it would be a hard match since it is very hard to corner up a winning position against Iris. Moreover, Iris is also a very fast winner that may instead control the pace of the game. You know, Hephaestus is bad at defending. For Artemis and Triton, they can simply use the level-2’s area contributed by Hephaestus easily, while aggressively building level-3’s to control the pace of the game.

Hephaestus needs to be aggressive. You should be the one to completely control the pace of the game, instead of following your opponent’s pace. Every level-1 you build should be fierce enough that everyone will rush to you and try to stop you from topping. Enjoy the show of all gods chasing for Hephaestus.

Hephaestus always can control the pace of the game but he is not really good against good jumpers. If available, without the opponent being a jumper, choosing him is always a good choice among the two gods available.